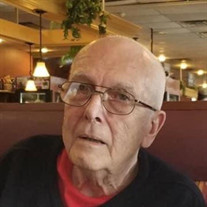 Albert "Sonny" H. Arnold, Jr., 91 of Lancaster passed away Friday evening, March 5, 2021 at Manor Care Nursing and Rehab. Born in Lancaster on March 28, 1929, he was the son of the late Albert H., Sr. and Mildred Breckel Arnold. He was the husband of Carrie E. Herr Arnold, with who he married on April 24, 1954. Albert was called "Sonny" by all his friends. Albert graduated in 1947 from Lancaster Catholic High School. He was a member of Sacred Heart Catholic Church. Albert worked as a pin boy for the St. Joe's Club and as a caddy for Lancaster Country Club while in high school. Albert served in the United States Army from 1951 to 1953. He enjoyed Bowling. He helped to establish Little Evergreen Nursery in Strasburg with his father in law. Albert worked for over 30 years for Automotive Sales as a salesperson and in shipping. He retired in 2007 from Reardon Auto Parts. Albert will be missed by his wife of nearly 67 years, Carrie; son, Mark H. Arnold of Hellam and his daughter, Karen M., wife of Luis E. Rosa, Jr. of Lancaster; grandson, James Zipp of Lancaster; his sister, Mildred Young of Merrick, Long Island and nieces and nephews. He was preceded in death by his granddaughter, Heather Mae Arnold and his sister, Lois A. Scheid. Family and friends are respectfully invited to attend Albert's Christian Prayer Service on Saturday, March 13, 2021 at 11AM from the Melanie B. Scheid Funeral Directors & Cremation Services, 317 E. Orange Street, Lancaster. Friends will be received at the funeral home on Saturday from 10 to 11AM. Interment will be held in the St. Joseph's Catholic Cemetery, Bausman where military honors will be accorded. Please omit flowers, memorial remembrances may be made in Albert's memory to Hospice & Community Care.

Albert "Sonny" H. Arnold, Jr., 91 of Lancaster passed away Friday evening, March 5, 2021 at Manor Care Nursing and Rehab. Born in Lancaster on March 28, 1929, he was the son of the late Albert H., Sr. and Mildred Breckel Arnold. He was the... View Obituary & Service Information

The family of Albert "Sonny" H. Arnold Jr. created this Life Tributes page to make it easy to share your memories.

Send flowers to the Arnold family.