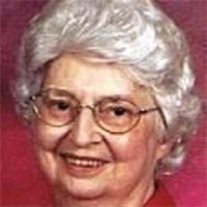 Annabel M. Weyand, 88, Gretna Springs, passed away Wednesday, April 10, 2013 at Cedar Haven, Lebanon. She was the wife of Glenn W. Weyand, whom she married June 8, 1946. She was born in Lebanon on July 24, 1924, a daughter of the late Arthur D. and Christine Blouch Weinhold. She was an Operator/supervisor for the former Bell Telephone Co. and later worked at the Penn State Extension Service in Lebanon. She was a member of Zion Iona United Methodist Church, Lebanon. She was a 1942 graduate of Lebanon High School and a life member of both, Order of Eastern Star Lebanon Chapter #115 and Victory Court, Order of the Amaranth, Elizabethtown. Annabel is survived in addition to her husband by son, G. Kary, husband of Barbara Weyand, Lebanon; daughters, Corinne W. wife of John P. Bulley, Annville; Melissa K. Mujica, Wendell, NC; 10 grandchildren and 10 great grandchildren. She was preceded in death by a brother, Arthur B. Weinhold. Family and friends are respectfully invited to attend Annabel's funeral service on Saturday, April 13, 2013 at 11:00 AM from Zion Iona United Methodist Church, 1920 S. 5th Ave, Lebanon, PA 17042 with Rev. Frank Shaefer officiating. A viewing will be held at the church beginning Saturday at 10:00 AM. Burial will be made in Iona Cemetery. In lieu of flowers memorial remembrances in Annabel's name may be made to Zion Iona UM Church, 1920 S. 5th Ave., Lebanon, PA 17042.

The family of Annabel M. Weyand created this Life Tributes page to make it easy to share your memories.

Send flowers to the Weyand family.