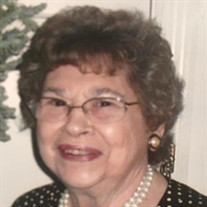 Barbara Roberta Wallace, 88, of Lancaster passed away on Monday, September 7, 2020 at Hospice & Community Care, Mount Joy. Barbara was born on January 14, 1932 in Lancaster, daughter of the late Amos Buckwalter and Margaret Roberta Adams Shenk. She was the wife of William Warren Wallace, with whom she was married on July 21, 1956. They recently celebrated their 64th Anniversary. Barbara graduated from McCaskey Class of 1949. She was treasurer of the 49ers reunion committee. Barbara was a lifetime member of St. John Lutheran Church in Lancaster where she taught Sunday School and was a member of the choir. In her earlier years, she worked for the former Conestoga National Bank, and enjoyed playing tennis and golf. Barbara had many friends. She kept in touch with many of her high school classmates and childhood playmates. If Barbara knew when you had a special occasion, you were sure to get a hand-written greeting from her. Barbara enjoyed traveling, both domestic and abroad. Her favorite vacation spot beginning in 1981 and extending for nearly 35 years, was with friends and family in Ocean Pines, MD. Barbara was an avid reader, family photographer, and enjoyed collecting antiques, and figurines of elephants and giraffes. She was a long time member of Leola Women's Club and a member of several Bridge Clubs, including one formed back when they were all newlyweds with New Year's Eve parties held every year from the mid 50s through this past NYE. She was famous for her red lipstick, and the Fruit Salad she brought to every family gathering and picnic. Always having a smile on her face, Barbara will be missed by many. She will be deeply missed by her husband, William W. Wallace; daughter, Margaret “Molly” Elizabeth Wallace of Lancaster, her brother, Robert A., husband of Evelyn Haig Shenk, and sister in law, Elizabeth Brungard Shenk. Barbara was preceded in death by her brother, William A. Shenk. Family and friends are respectfully invited to attend Barbara’s Funeral Service on Saturday, September 26, 2020 at 11AM from St. John Lutheran Church, 223 W. Orange Street, Lancaster with Pastor Margaret Kassees officiating. Interment will be held in Conestoga Memorial Park. Please omit flowers, memorial remembrances may be made in Barbara’s memory to her church or to St. Jude's Research Hospital.

The family of Barbara Roberta Wallace created this Life Tributes page to make it easy to share your memories.

Barbara Roberta Wallace, 88, of Lancaster passed away on Monday,...

Send flowers to the Wallace family.