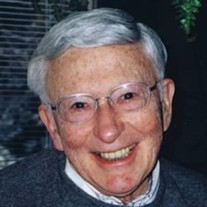 Bertram (Bert) M. Breit, passed away at Spang Crest Manor, Lebanon on Monday, December 6, 2021. He was the husband of the late Diane Gold Breit, who passed away April 27, 2013. Bert was born in New York City on July 15, 1927, son of the late Samuel J. and Lillan Mandlowitz Breit. In 1944, while in high school, at 17 years old, he enlisted in the Army Specialized Training Program. He served in the European Theatre and was promoted from Sgt. First Class to Second Lieutenant and was discharged in 1947 as a First Lieutenant. He served 12 years in the Army Reserve. He graduated from New York University School of Commerce in 1950. Prior to moving to Lebanon he was employed at Federal Reserve Bank in New York City. Bert retired from S&M Apparel Manufacturing in 1992 and previously managed Everite Knitting Mills and Bannon Mills, he enjoyed the friendship of his employees and their loyalty. After retirement he pursued a new career in the Caribbean where he was employed as a consultant and manager for several garment factories located there. After his career in the Caribbean, he was employed as a bookkeeper for his son Steven L. Breit, Attorney at Law in Lancaster for 12 years. A 60 plus year member of Lebanon’s Congregation Beth Israel, he served as President, Trustee and an active member of several committees. He served on the Board of Directors for most of his Congregation membership. Bert was a life member of Lebanon Elk’s Lodge 631, American Legion Post 158, VFW Post 15040, Jewish War Veteran Post 97, past president of B’nai Brith Lodge 1197 and District President and life member of B’nai Brith District #3 and past Commander of JWV Post 443. He participated in the Annual Lebanon County Naturalization Court and Law Day ceremonies for four decades. He was a 12 plus year member and past chairman of Compeer of Lebanon County. Bert also served as an Inspector of Elections for the second Ward West for over 20 years. Additionally, he was active in Anti-Defamation League fighting Anti-Semitism, racism, hatred and bigotry. Bert also served on the election committee for Magisterial District Judge Michael Smith in Cleona well as serving as treasurer during the campaign of Lebanon Mayor Sherry Capello. He is survived by a son Steven L. Breit of Lititz, grandchildren Peter Z. Breit and Julia L. Breit of Lititz. He was preceded in death by his son Peter M. Breit and his sister Pat Bright Blumberg. Family and friends are respectfully invited to attend Bert’s funeral service on Friday, December 10, 2021 at 1 PM from Porterfield-Scheid Funeral Directors & Cremation Services, Ltd., 890 Isabel Drive, Lebanon with Rabbi Sam Yoland officiating. Burial will be made in Beth Israel Cemetery, Lebanon. Please omit flowers, contributions in Bert’s memory may be made to the Breit Memorial Scholarship Fund, c/o Cedar Crest High School, 115 East Evergreen Road, Lebanon PA 17042.

The family of Bertram M. (Bert) Breit created this Life Tributes page to make it easy to share your memories.

Send flowers to the Breit family.