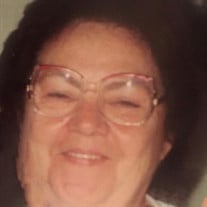 Betty J. Sample, 88, formerly of Conestoga passed away at Quarryville Presbyterian Home Tuesday morning, January 26, 2021. Born in Lancaster on March 13, 1932, she was the daughter of the late Oliver and Mabel Gebhart Fitzkee. She was the wife of Richard C. "Dick" Sample, Sr. who preceded her in death in 2016. Betty was an amazing wife and helper to Richard for over 66 years. She was a loving soul who helped to raise her 2 grandchildren and remained a big part in the lives of her great grandchildren as well. Betty had worked over 25 years for Hubley Toy Company. She enjoyed horses as well as many other animals that she took part in caring for. Betty also enjoyed gardening and tending to it in the summer. She was an amazing cook and spoiled her family with her many signature meals. She was a great baker, having all the cookies and cakes one could eat. Betty will be greatly missed and affectionately remembered by all the lives she touched. She is survived by her grandson, Derrin M. Sample of Landisville; her granddaughter Jami M. Sprecher and her great grandchildren, Skyla Taglieri, Brady Sample, Ethan Sample, Josiah Sample, Ariel Sprecher, Isaiah Sprecher and Noah Sprecher. She was preceded in death by her son, Richard C. Sample, Jr., her brother, Arthur Fitzkee and her sister, Pauline Rineer. Family and friends are respectfully invited to Betty's funeral service on Wednesday, February 3, 2021 at 1PM from the Colemanville UM Church, 210 Colemanville Church Road, Conestoga, with Pastor Derrick Gutierrez officiating. Friends will be received on Wednesday at the church from Noon until 1PM. Interment will be held in the adjoining cemetery.

Betty J. Sample, 88, formerly of Conestoga passed away at Quarryville Presbyterian Home Tuesday morning, January 26, 2021. Born in Lancaster on March 13, 1932, she was the daughter of the late Oliver and Mabel Gebhart Fitzkee. She was the... View Obituary & Service Information

The family of Betty J. Sample created this Life Tributes page to make it easy to share your memories.

Betty J. Sample, 88, formerly of Conestoga passed away at Quarryville...

Send flowers to the Sample family.