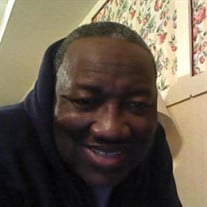 Bruce W. McCloud, Sr. departed this life on February 10, 2021 at the age of 65. Bruce was born February 1, 1956 in Darby, Pennsylvania. He grew up in Sharon Hill, moved to Philadelphia, and eventually settled in Lancaster. He frequently traveled back to the Philadelphia area to visit family. A graduate of Darby Township High School, Bruce was an exceptional athlete, playing quarterback for his high school football team. Following high school, he attended Thaddeus Stevens College of Technology, where he served as quarterback on the college team. Bruce became employed at Foamix and then at RR Donnelley. He was also a substitute teacher at Fulton Elementary School. He served as head coach for youth track and field, basketball and baseball teams in both Philadelphia and Lancaster, and enjoyed being a role model. Bruce was an avid football fan and popular family man. He was very sociable and got along with just about everyone who knew him. He was a cherished community member and will be especially remembered for his sense of humor and distinct laugh. Bruce is survived by his mother, Juriel Shelton, as well as his sister, his sons Dwayne, Aaron, Tony, and Bruce Jr., and his daughter Destiny. He is also survived by his Aunt Dorothy, as well as his Uncle Albert, his grandchildren, nieces, and a host of cousins, family, friends, and young people he mentored. He was preceded in death by fatherly figure Charles White- affectionately known as “Whitey” - and beloved Aunt Anna Mae Crawley Family and friends are respectfully invited to attend Bruce's funeral services on Thursday, February 25, 2021 at 11AM from the Melanie B. Scheid Funeral Directors & Cremation Services, 317 E. Orange Street, Lancaster, PA with Pastor John Knight officiating. Friends will be received at the funeral home on Thursday from 9:30 to 11AM.

Bruce W. McCloud, Sr. departed this life on February 10, 2021 at the age of 65. Bruce was born February 1, 1956 in Darby, Pennsylvania. He grew up in Sharon Hill, moved to Philadelphia, and eventually settled in Lancaster. He frequently traveled... View Obituary & Service Information

The family of Bruce W. McCloud created this Life Tributes page to make it easy to share your memories.

Send flowers to the McCloud family.