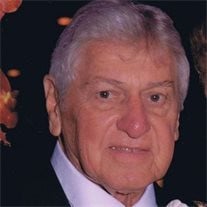 Carl E. Keener, 84, Elizabethtown, passed away Thursday, March 17, 2011 at the Masonic Village, Elizabethtown. He was the husband of Shirley Ann Geib Keener, to whom he was married for 58 years. Born on August 31, 1926 in Colebrook, he was the son of the late Edwin B. and Mary Youtz Keener. Carl was a Navy Veteran of WWII serving on an aircraft base in the South Pacific. While serving in the Navy he became interested in the electrical field , which became his career and in 1962 he founded Keener Electric Motors, Inc., Lebanon where he continued to worked part-time until recently. He was an active member of Trinity Evangelical Lutheran Church, Colebrook, serving on numerous committees, church council and taught sunday school. He served on the Palmyra Recreation Committee for South Londonderry Twp. for 25 years. Carl was a member and past president of the Lebanon Optimist Club and had served on the Advisory Board of the Lebanon County Career and Technical Center. He was a member of Navy Club Ship 91, Lebanon. He was a member of Brownstone Lodge #666 F&AM, Hershey, Zembo Shrine, Harrisburg Consistory, Weidle Royal Arch Chapter #197, Lebanon Council #27, Hermit Commandery #24 Knights Templar, Tall Cedars of Lebanon, Elizabethtown Shrine Club and was secretary of Elizabethtown Hi 12 Club #629. Surviving in addition to his wife, are sons, Jeffrey, husband of Mary Keener, Cornwall; David, husband of Janet Keener, Cleona; Donald, husband of Romayne Keener, West Lawn; grandchildren, Andrew, Katelyn and Daniel Keener; step grandchildren, Joe Klatt, Jasime Belflower, Emily and Becky Farst and sister, Margaret Daub, Colebrook. Carl’s kindness, gentleness and wit to his family, friends and business customers, will be surely missed by all. Relatives and friends are respectfully invited to attend Carl's funeral service from Trinity Lutheran Church, 58 Church Road, Colebrook, on Tuesday, March 22, 2011 at 11:00 AM with Rev. Elizabeth Lartz and Rev. Conrad Youse officating. Visitation will be Tuesday beginning at 9:30 AM, at the church. Interment will be held in the adjoining church cemetery. Please omit flowers, memorial remembrances in Carl's memory, may be made to Trinity Lutheran Church, 58 Church Road, Manheim, PA 17545. Arrangements Entrusted to Ruffner-Porterfield Funeral Directors & Cremation Services, 890 Isabel Drive, Lebanon. For further information please call 717-272-4634 or visit www.ruffnerporterfieldfh.com to share on-line condolences.

Carl E. Keener, 84, Elizabethtown, passed away Thursday, March 17, 2011 at the Masonic Village, Elizabethtown. He was the husband of Shirley Ann Geib Keener, to whom he was married for 58 years. Born on August 31, 1926 in Colebrook, he was the... View Obituary & Service Information

The family of Carl E. Keener created this Life Tributes page to make it easy to share your memories.

Send flowers to the Keener family.