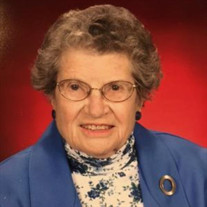 Carol Dean Owen Huber, 98 of Red Hill Road, Pequea passed away peacefully at home Wednesday, June 2, 2021. Carol Dean was born in West Jefferson, North Carolina on December 7, 1922, the youngest daughter of the late Harvey Worth and Martha Naomi Kilby Owen. Carol Dean and her family moved to Pennsylvania in 1929. She was the beloved wife of the late Richard “Dick” M. Huber, with whom she married on November 8, 1943 and preceded her in death on July 22, 2006. Carol graduated from Quarryville High School in 1939. She had worked for Woolworth’s in Lancaster, Hamilton Watch and hanging wall paper with her sister, Eva Girvin and her son in law, Scott Hoover. She was a 50 year member of Robert Fulton Order of Eastern Star, Chapter 446, where she was a past matron. She was a consistent source of practical biblical wisdom and lived by those precepts. She was very hospitable, especially with missionaries inviting them to dinner regularly. She was a true Christ follower and shared that love for Jesus with her children, grandchildren and many friends. She was the oldest and lifetime member of Mt. Nebo United Methodist Church where she taught Sunday School, served as president of the Women’s Society, was church historian and wrote a Christmas Cantata for the church choir. Carol Dean was a wordsmith and loved to write poetry. She was a published author, writing 2 books and many articles for Lancaster Newspaper and Lancaster Farming. She enjoyed making quilts for many family members, friends and others. She enjoyed doing jigsaw puzzles, crossword puzzles and coloring pictures. Carol’s family meant the world to her. She was a loving example to others. Her brothers and her sisters were also her friends. They looked out for each other and had a very close bond. She was preceded in death by her brothers, William Owen, Harvey Worth Owen, Jr., Jackson Hicks Owen and Philip Kilby Owen and her sisters, Virginia Mae Jones, Mary M. Clark, Stella Fedora Morrison, Ollie Grace Badger, Flossie Grace Steinman and Eva Girvin. Carol Dean will be deeply missed by her sons, R. Michael, husband of Pam Huber of Parker, Colorado, Raymond M., husband of Peggy Huber of Willow Street and Ralph M., husband of Becky Huber of Pequea. She was preceded in death by her son, R. Mitchell Huber. Her daughters, loved their mother deeply, Theresa C. Huber of Pequea, Mary K., wife of Mark Hurst of Sydney, Australia and Sandra B., wife of R. Scott Hoover of Holtwood survive her. She is also survived by 41 grandchildren, 49 great grandchildren, her daughter in law, Avis Huber of Quarryville and her brother, Joseph K. Owen of Washington Boro, along with many friends and extended family. Family and friends are respectfully invited to attend Carol’s funeral services on Saturday, June 12, 2021 at 2PM from the Mt. Nebo United Methodist Church, 673 Martic Heights Drive, Pequea, PA 17565. Friends will be received on Friday, June 11, 2021 from 6 to 8PM from the Melanie B. Scheid Funeral Directors & Cremation Services, The Gundel Chapel, 3225 Main Street, Conestoga, PA and also on Saturday at the church from Noon until 2PM. Order of Eastern Star services will be conducted by Robert Fulton Chapter #446 prior to the funeral service on Saturday. Interment will be held in the adjoining church’s cemetery.

The family of Carol Dean Owen Huber created this Life Tributes page to make it easy to share your memories.