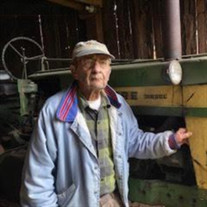 Clayton H. Harnish, 81 of Willow Street passed away at his family farm Monday morning, April 25, 2022 after a 8 year battle with cancer. Born on December 21, 1940 on the farm in Providence Township, he was the son of the late Jacob and Anna Harnish Harnish. Clayton was married for 58 years to Dolores J. Warfel Harnish last June 29. Clayton was born, raised, lived, worked and died on the family Harnish farm. Farming was Clayton's life. He worked well into his 70's but never stopped farming. He enjoyed allowing his grandchildren to help pick produce or ride the tractor with him. He enjoyed raising crops and had a veal barn for many years. Clayton was a hardworker and took his work serious. He began working as a furnace technician with John Gerlach in his early 20's. He continued working for Roy Ressler in Mountville as a service man and eventually finished out his career with Alto Dairies in Wisconsin formerly known as Real Veal as the East Coast Service Technician. He served on the planning commission for Providence Township for a few years. Clayton was a life long member of Byerland Mennonite Church. He enjoyed playing softball in the southern end church league. He enjoyed a round of golf or playing minature golf with his family. He loved to travel with his wife and children. They also took several train trips throughout the United States. Clayton is survived by is wife, Dolores; son, Bernell (Bernie) L. Harnish of Millersville; daughter, Lucinda (Cindy) D. Harnish, wife of Bradford Smith of Lancaster; twin grandchildren, Clayton J. and Syriana K. Smith; brother, Paul, husband of Grace Harnish of Conestoga and sisters, Ruth Mast of Oley and Rosanne Miller of Millersville. He was preceded in death by his brother, Jacob Harnish. Family and friends are respectfully invited to attend Clayton's funeral service on Saturday, April 30, 2022 at 11AM from the Byerland Mennonite Chuch, 931 Bylerland Church Road, Willow Street, PA. Friends will be received at the church on Saturday from 9:30 to 11AM. Interment will be held in the adjoining church's cemetery. Please omit flowers, memorial remembrances may be made in Clayton's memory to Mennonite Central Committee, 21 S. 12th Street, Akron, PA 17501.

Clayton H. Harnish, 81 of Willow Street passed away at his family farm Monday morning, April 25, 2022 after a 8 year battle with cancer. Born on December 21, 1940 on the farm in Providence Township, he was the son of the late Jacob and Anna... View Obituary & Service Information

The family of Clayton H. Harnish created this Life Tributes page to make it easy to share your memories.

Clayton H. Harnish, 81 of Willow Street passed away at his family...

Send flowers to the Harnish family.