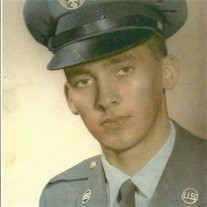 Dale S. Lias, Jr., 75, passed away on November 15, 2012 after a long, courageous battle with leukemia. Dale was born in Rural Valley, Pennsylvania on March 16, 1937 to Dale Stewart Lias and Ruth Harris. He was the fourth oldest of thirteen children. Dale graduated from Shannock Valley High School in 1955. He played basketball, played trombone in the high school band and acted in school plays. He married his high school sweetheart, Mary Jane Fleming, on August 13, 1957. Dale enlisted in the United States Air Force in 1961 and served four years. He was stationed at McCoy Air Force Base in Orlando, Florida. He served overseas in Okinawa and travelled to Laos, Cambodia, Thailand and Vietnam. He was a champion fast-pitch softball pitcher in the Air Force league. Dale was a proud veteran and a member of the American Legion. Dale had a 46 year career in the financial services industry. His career took his family to five states finally settling in Houston, Texas in 1974. He retired from Blake Credit Associates. Dale was an avid bowler, played softball until the age of 62, and enjoyed reading. He was blessed to live close to his immediate family. Dale's pride and joy were his grandchildren. He loved to attend their sports events, recitals, school events and birthday parties. Dale was preceded in death by his parents, his brother Jimmy and his sister, Ellen Jean Gasperoni. He is survived by his wife, Mary; his daughters Karen Valente and husband Fred of Bellaire, Texas; and Mitzie Rivers and husband George of Tomball, Texas. His beloved grandchildren are Gina, Marisa and Tessa Valente and George, Clark and Emma Rivers. He is also survived by four brothers Bill, Don, Bob and Dick, and six sisters Naomi, Midge, Patty, Mary, Francy and Janet, as well as many nieces, nephews and cousins. Per Dale's wishes, there will be a private family memorial service and burial at the Houston National Cemetery. For those who so desire, contributions in his memory may be directed to The Leukemia and Lymphoma Society, 1311 Mamaroneck Avenue, Suite 310, White Plains, NY 10605 or www.lls.org.

Dale S. Lias, Jr., 75, passed away on November 15, 2012 after a long, courageous battle with leukemia. Dale was born in Rural Valley, Pennsylvania on March 16, 1937 to Dale Stewart Lias and Ruth Harris. He was the fourth oldest of thirteen... View Obituary & Service Information

The family of Dale S. Lias, Jr. created this Life Tributes page to make it easy to share your memories.

Send flowers to the Lias, family.