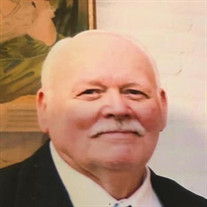 Daniel L. Roschel, Jr., 87 formerly of Manor Township passed away Friday morning, February 4, 2022 at Hamilton Arms Nursing Center. Born in Lancaster on August 5, 1934, he was the son of the late Daniel L., Sr. and Julia Stouch Roschel. He was the husband of Nancy L. Evans Roschel who preceded him in death on June 12, 2014. Dan attended Lancaster Catholic High School thru the 11th grade, his family then moved to Georgia and he graduated from South Cobb High School in Austell, GA. Dan retired from Kerr Glass where he was a pipe fitter. He was a life long member of St. Joseph's Catholic Church. He coached for many years for the Lancaster Midget Football League for the Lancaster Presidents and St. Joe's Hillians and was a Green Bay Packer and Notre Dame fan. Dan was an easy going and funny guy. He enjoyed watching Westerns and reading Western novels. He enjoyed playing Santa for years, for family events, Kerr Glass and the Cosmopolitan Club. He also found relaxation in camping and fishing. Dan will be missed by his son, Douglas L., husband of Patricia Roschel of Willow Street; daughters, Victoria L. Casey of Lancaster, Kimberly A., wife of Richard Dunn of Lancaster and Wendy J. Roschel of York; grandchildren, Carrie, Michael, Jason, Eric, Alicia, Brandon, Ryan, Andrea and Anthony and 17 Great Grandchildren. Dan is also survived by his brothers, Charles, husband of Katie Roschel of Lancaster and Thomas, husband of Diane Roschel of Millerstown and his sisters, Doris Kauffman of Fort Myers, FL, Susan Roschel of Lancaster and Patricia, wife of Earl Coomes of Quarryville. Family and friends are respectfully invited to attend Dan's Christian Prayer Service on Thursday, February 10, 2022 at 11AM from the Melanie B. Scheid Funeral Directors & Cremation Services, 317 E. Orange Street, Lancaster with Deacon Peter Jupin officiating. Friends will be received at the funeral home on Thursday from 10 to 11AM. Interment will be held in the St. Joseph's Cemetery, Bausman.

The family of Daniel L. Roschel Jr. created this Life Tributes page to make it easy to share your memories.

Send flowers to the Roschel family.