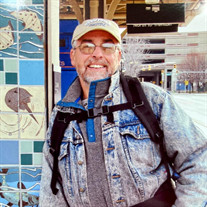 Dennis D. Hough, 73, of Morrisville, Bucks County died Thursday, July 1, 2021 after a courageous 11-year battle with cancer. He was born in Trenton, New Jersey on October 16, 1947, son of the late Edward M. Hough and Lillian A. Bracher. Dennis graduated from Neshaminy High School in 1965 where he ran track and played football. Dennis enlisted in the US Navy in June 1967. He faithfully served his country for nine years. His service included two years active duty on the Destroyer U.S.S. Keppler in the Pacific fleet during the Vietnam War. Dennis was a talented, devoted, and meticulous stone mason by trade. He worked diligently to gain the respect and admiration of several local builders. Dennis served almost 40 years volunteering with the Boy Scouts of America. He was a Scoutmaster for Troop 407 and Troop 10 in the Bucks County Council. Dennis received numerous honors while serving as a scoutmaster. He especially loved the backpacking adventures he led at Philmont Scout Ranch in New Mexico. Dennis was humble and never asked for recognition. Recently he told a former Scout, "It was my honor and privilege to be your Scoutmaster." Dennis enjoyed sports in high school, college, and as a father. He was involved as a coach for his sons’ baseball teams. He supported his sons in countless high school and college athletic events. He was a loyal Philadelphia sports fan, especially the Eagles. Other passions included being outside in nature, reading countless books, puzzles, and collecting coins. Dennis is survived by his sons, Christopher Hough of Long Beach, CA; Jeff Hough, husband of Jenn Adams of Bozeman, MT; Ryan Hough, husband of Kate Hough of Lancaster, PA; four grandchildren: Irving, Declan, Lillian, and Callan; brothers, Stuart Hough, husband of Linda Hough of Madera, CA; and Scott Hough of Champagne, IL. Funeral services will be held on September 23, 2021 at 11:30AM at Washington Crossing National Cemetery with full military honors. In lieu flowers, please consider making a donation to the Washington Crossing Council Boy Scouts of America in memory of Dennis D. Hough. Please use this link to make a donation: https://bsawcc.org/support-scouting/make-a-memorial-gift/

The family of Dennis D. Hough created this Life Tributes page to make it easy to share your memories.

Send flowers to the Hough family.