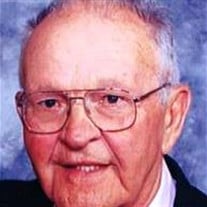 Dorsey G. Bingaman, 84 of Millersville passed away Wednesday morning, February 27, 2019 at St. Anne's Retirement Community. Born on January 20. 1935 in Lebanon County, he was the son of the late Paul and Sarah Foulk Bingaman. Dorsey was the husband of Helen Y. Newcomer Bingaman with who he married on August 8, 1955. Dorsey served during the Korean Conflict in the US Navy. As a young man he worked for RCA in Lancaster and as a heavy equipment operator. He pursued his dream of becoming a truck driver and drove truck for Tank Truck Rentals, Ward Trucking and Lancaster County Solid Waste Management. He worked up until 5 years ago for the LCSWM at the Creswell Landfill. He was a member of the Millersville-Manor VFW #7294. Dorsey enjoyed boating, motorcycling and bicycling with his wife on the Rail to Trails in different parts of Pennsylvania. He liked to go to antique tractor shows, always looking for someone to talk to and loved to make people laugh. Dorsey is survived by his wife of 63 years, Helen; his son, Derrick G. Bingaman of Collegeville and several nieces and nephews. He was preceded in death by his brother, Paul Bingaman and sisters, Margaret Kauffman and Eleanor Hartranft. Family and friends are respectfully invited to attend Dorsey's funeral service on Saturday, March 2, 2019 at 11AM from the Millersville Community Church-Grace Campus, 163 W. Frederick Street, Millersville, PA. Friends will be received at the church from 10 to 11AM at the church. Interment will be held in the Milllersville Mennonite Cemetery. Please omit flowers, memorial remembrances may be made to Hospice & Community Care or to a Charity of one's choice. For further information please call 717-872-1779 or to submit an online condolence visit www.thegundelchapel.com. Melanie B. Scheid Funeral Directors & Cremation Services Conestoga and Lancaster

Dorsey G. Bingaman, 84 of Millersville passed away Wednesday morning, February 27, 2019 at St. Anne's Retirement Community. Born on January 20. 1935 in Lebanon County, he was the son of the late Paul and Sarah Foulk Bingaman. Dorsey was the... View Obituary & Service Information

The family of Dorsey G. Bingaman created this Life Tributes page to make it easy to share your memories.

Send flowers to the Bingaman family.