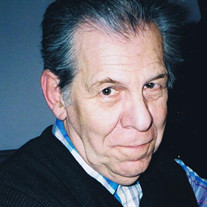 E. Jere Snavely, 87, of Lebanon passed away Sunday, December 5, 2021 at the Wellspan Good Samaritan Hospital. He was the husband of the late Brenda A. Gibbs Snavely who passed away June 20, 2004. Jere was born in Lebanon on September 24, 1934, son of the late Earl L. and Anna M. Brightbill Snavely. In his youth, Jere had been employed by Fink’s Bakery. He worked at ALCOA for over 30 years and retired from the Cornwall Lebanon School District Food Service department and was associated with the Civil Air Patrol for 2 years. He was a member of St. Stephen’s Christian Fellowship, Lebanon. He enjoyed hunting, collecting beer cans, trains, Penn State Football and the Phillies. Jere was a coach for Hebron Fire Co. and Teener Baseball teams and managed women’s softball. Jere was a very active Mason being a member over 50 years and a Past Master of Mt. Olivet Lodge 704 F&AM, Lebanon, where he also served as secretary for 18 years, 50 year member of Tall Cedars of Lebanon Forest 25 and had served as secretary for 6 years and was a Past Grand Tall Cedar, was a past president of Quittie Woods, over 50 year member of Harrisburg Consistory. A member over 25 years, member and a Past Worthy Patron of Chapter 115 OES, over 25 year member and Past High Priest of Weidle Chapter #197, Lebanon, 25 year member and Past Thrice Illustrious Master of Lebanon Council #27, 25 year member and a Past Commander of Hermit Commandry KT #24, Lebanon. Member of Erin Council #6 Knight Masons, Harrisburg, Red Cross of Constantine, Harrisburg, member and a past treasurer for 10 years of Keystone Frei Maurer Lodge #400, Reading, Rajah Shrine, Reading, Lehigh Joshua Assoc., York Cross of Honor, Past Sovereign of Rex Council #47, Harrisburg, Past Master of Royal Arch Mason, Harrisburg, Order of Silver Trowel. He was a member and past secretary Lebanon Masonic Temple Assoc., Past President of Lebanon County Shrine Club and member of Lebanon County Consistory. Jere was also a member of South Lebanon Lions Club. Jere will be sadly missed by his daughters, Kim, wife of Brian Weidman of Lebanon, Kristi, wife of Loren Earhart of Richland; grandchildren Lt. Commander Joshua, husband of Ashley Weidman, Kaitlyn, wife of Jonathan Day, Natasha Earhart, Jacob Earhart and 7 great grandchildren. Family and friends are respectfully invited to attend Jere’s funeral service on Saturday, December 11, 2021 at 11 AM from Porterfield-Scheid Funeral Directors & Cremation Services, Ltd., 890 Isabel Dr., Lebanon with Pastor Reba Jean Stone officiating. A viewing will be held Friday, December 10, 2021 from 6 to 9 PM and Saturday from 10 AM to time of service at the funeral home. The family suggests in lieu of flowers memorial contributions in Jere’s memory may be made to St. Stephen’s Christian Fellowship, 1100 Hunters Chase Ln, Lebanon 17046 or the Masonic Village at Elizabethtown, 1 Masonic Dr., Elizabethtown 17022.

E. Jere Snavely, 87, of Lebanon passed away Sunday, December 5, 2021 at the Wellspan Good Samaritan Hospital. He was the husband of the late Brenda A. Gibbs Snavely who passed away June 20, 2004. Jere was born in Lebanon on September 24, 1934,... View Obituary & Service Information

The family of E. Jere Snavely created this Life Tributes page to make it easy to share your memories.

Send flowers to the Snavely family.