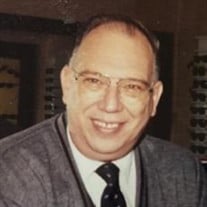 Edward M. (Mike) Sweeney, 81, passed away August 3, 2021 at his home in Manor Township in the presence of his wife, Noreene (Lore) Sweeney and their three dogs. The couple celebrated their 35th anniversary on October 12, 2020. Born in Trenton, NJ on March 23, 1940, he was the first born of the late Annabelle (Henry) Sweeney and Edward Sweeney of Takoma Park, Maryland. Mike grew up in Takoma Park, where he attended High Point High School. Mike was employed by Miller Optical for 32 years as an optician until his retirement in 2005. He operated the Millers’ Optical World office on Columbia Avenue in Lancaster. It was a job he always loved, where he looked forward to serving each customer. Mike was a member of the Lancaster Recreation Center Senior Citizens group on Fairview Avenue. His favorite activity was Bingo, as well as the many special activities and celebrations held there. Among Mike’s interests were photography and travel, a combination he pursued throughout the country as well as England, Scotland, Wales, Botswana, the Netherlands, Mexico and Iceland. He was a founding member of the Friends of the Rocky Springs Carousel and the RSC Association. It was his dream to see the carousel go back into operation in Lancaster. In addition to his wife, Noreene, Mike is survived by his siblings, Maryann Shenk, Kathleen Thomasson, Thomas Sweeney; Maureen Sweeney and Shawn Sweeney; Mike’s sons, Tim and wife, Susan, Mark and wife, Cindi; grandsons, Michael, Daniel (DJ), Steven, Rick and Jake, plus great grandsons, Gage and Ezra and great granddaughter, Vega. His extended family includes nieces, nephews, great nieces and great nephews. Special thanks extended to Kindred Hospice of Lancaster, who provided loving care for Mike over the last 17 months and also to the LGH Physicians Geriatrics, his primary medical providers for the past 16 years. The family will hold a celebration of life ceremony at a later date to be determined. Memorial remembrances may be made in Mike’s memory to Kindred Hospice of Lancaster, 1891 Santa Barbara Dr. Suite 201, Lancaster, PA 17601. For other information, please call 717-872-1779 or to submit an online condolence visit www.melaniebscheidfh.com.

Edward M. (Mike) Sweeney, 81, passed away August 3, 2021 at his home in Manor Township in the presence of his wife, Noreene (Lore) Sweeney and their three dogs. The couple celebrated their 35th anniversary on October 12, 2020. Born in Trenton,... View Obituary & Service Information

The family of Edward M. "Mike" Sweeney created this Life Tributes page to make it easy to share your memories.

Send flowers to the Sweeney family.