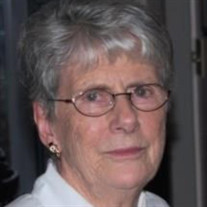 Elinore S. Lynch, 93 of Mt. Gretna passed away Wednesday, March 17, 2021 at Hershey Medical Center. Born on September 13, 1927 in Lincoln, Delaware, she was the daughter of the late Calvin H. and Elizabeth Hudson Satterfield. She was the wife of Norman B. Lynch who preceded her in death on July 11, 2000. Elinore was a graduate of Jefferson Hospital School of Nursing in Philadelphia, where she received her RN license. She further her education at the University of Pennsylvania where she obtained a Master of Education degree. Elinore retired from the Cedar Crest High School where she was a school nurse. Earlier in his life, she worked for Jefferson Hospital, Philadelphia, Good Samaritan Hospital, Lebanon VA and Phil Haven. Elinore was an active member of Mt. Gretna UM Church, Mt. Gretna Fire Company and was a member of Mt. Gretna Winterites and Alumni Association of Jefferson School of Nursing. She enjoyed reading, puzzles, bird watching, knitting and traveling. Elinore will be missed by her daughter, Karen Jane Lynch of Mt. Gretna; son, Frank C. Lynch, companion of Darlene Knoll of Hummelstown; step daughter, Aleta Ann Moyer of Mt. Wilson; grandchildren, Heather Moyer, Samantha Lynch and Kathy Lynch. She is also survived by her sister, Norma Marvel of Magnolia, Delaware. She was preceded in death by her sisters, Iva Osowitt, Elsie Brook, Onolee Short, Maude Clark and her brothers, Frank and George Donovan. Family and friends are respectfully invited to attend Elinore's funeral service on Friday, March 26, 2021 at 11AM with Pastor Michael Remel officiating. Friends will be received at the church on Friday from 10 to 11AM. Interment will be held in the Indiantown Gap National Cemetery, Annville. In lieu of flowers, her family suggests memorial contributions in Elinore's memory may be made to the Mt, Gretna Volunteer Fire Co. Please be advised the CDC protocols will be followed.

Elinore S. Lynch, 93 of Mt. Gretna passed away Wednesday, March 17, 2021 at Hershey Medical Center. Born on September 13, 1927 in Lincoln, Delaware, she was the daughter of the late Calvin H. and Elizabeth Hudson Satterfield. She was the wife... View Obituary & Service Information

The family of Elinore S. Lynch created this Life Tributes page to make it easy to share your memories.

Send flowers to the Lynch family.