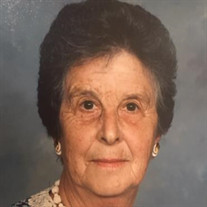 Esther B. Groff, 96 formerly of West Willow passed away Wednesday morning, July 24, 2019 at the Masonic Village, Elizabethtown. Born in Pequea Twp., on May 12, 1923 she was the daughter of the late Earl F. and Catherine Bechtold Wilson. She was the wife of C. Edward Groff who preceded her in death on January 20, 1981. Esther was a member of the West Willow Methodist Church. She was truly blessed throughout her life and never ceased in thanking God for his love and guidance. Esther will be missed by her daughter, Judy Ann wife of Robert R. Musser of Lititz; grandsons, Mark C., husband of Scotti Marie Musser of Manheim and Bryan S. Musser of Elizabethtown and great granddaughters, Amanda A., wife of Chris Smith of Elizabethtown and Alexa Musser. Esther is also survived by her sisters, Grace B. Glatfelter of Lancaster, Phyllis M., wife of Lester Mylin of West Willow, Sarah M., wife of William Mylin of Lancaster and Edith Y. Wilson of Millersville, along with several nieces and nephews. She was preceded in death by her brothers, Earl, Jr., Lloyd "Pete", Joseph, Robert, Clifford and Harold Wilson. Family and friends are respectfully invited to attend Esther's funeral services on Monday, July 29, 2019 at 11AM from the Melanie B. Scheid Funeral Directors & Cremation Services, 3225 Main Street, Conestoga with Pastor Robert Garvey officiating. Friends will be received at the funeral home on Monday from 10 to 11AM. Interment will be held in the New Danville Mennonite Cemetery, Pequea Twp. Please omit flowers, memorial remembrances may be made in Esther's memory to the American Heart Association, 610 Community Way, Lancaster or to the American Cancer Society, 314 Good Dr., Lancaster. For other information please call 717-872-1779 or to submit an online condolence visit www.melaniebscheidfh.com.

Esther B. Groff, 96 formerly of West Willow passed away Wednesday morning, July 24, 2019 at the Masonic Village, Elizabethtown. Born in Pequea Twp., on May 12, 1923 she was the daughter of the late Earl F. and Catherine Bechtold Wilson. She... View Obituary & Service Information

The family of Esther B. Groff created this Life Tributes page to make it easy to share your memories.

Esther B. Groff, 96 formerly of West Willow passed away Wednesday...

Send flowers to the Groff family.