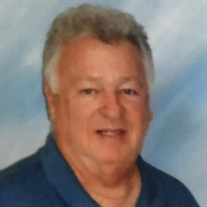 W. Gary Stevens, 74 of Pequea Township passed away Tuesday evening, December 15, 2020 at University of Pennsylvania Medical Center. Born in Lancaster on November 3, 1946, he was the son of the late Wilmer O. and Ellen Elizabeth Murphy Stevens. He was the husband of Louise Cauler Stevens with who he married on December 5, 1964. Gary graduated from Lampeter-Strasburg High School and HACC with a degree in criminal justice. He served in the US Air Force specializing in Aircraft Maintenance. He served with the City of Lancaster Police and retired with over 20 years of service. He went on to work for the State of Maryland, Dept. of Agriculture in the Mosquito Control Program and retired in 2014. Gary was a member of Lampeter United Methodist Church and attended Bethany United Methodist in Berlin, MD. Gary and Louise enjoyed spending their summers in Berlin, MD, enjoying the beach, jet skis and boating. He also enjoyed snowmobiling, hunting, trapping, camping and Nascar Races. He enjoyed time spent with his dog, Pippin. Gary was an outgoing and friendly guy who will be missed dearly by his wife, Louise; sons, Shawn G., husband of Ann E. Stevens and Brian K., husband of Renee R. Stevens, both of Lancaster and his grandchildren, Jacob T. Long, Abigail L. Stevens and Ella Marie Stevens. He is also survived by his sister, Kathy E., wife of Michael L. Landis of Millersville and his nieces, Erin Landis and Amy Fluga. Gary will be buried in the Conestoga Memorial Park. Memorial service will be held in the Spring of 2021. For further information, please call 717-872-1779 or to submit an online condolence visit www.melaniebscheidfh.com.

W. Gary Stevens, 74 of Pequea Township passed away Tuesday evening, December 15, 2020 at University of Pennsylvania Medical Center. Born in Lancaster on November 3, 1946, he was the son of the late Wilmer O. and Ellen Elizabeth Murphy Stevens.... View Obituary & Service Information

The family of W. Gary Stevens created this Life Tributes page to make it easy to share your memories.

Send flowers to the Stevens family.