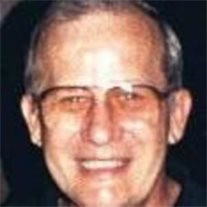 Harold E. Miller, 85, Lebanon, passed away Saturday, January 19, 2013 at Manor Care Health Services, Lebanon. He was the husband of Dorothy H. Heckard Miller, whom he married June 6, 1951. He was born in N. Annville Twp. on September 29, 1927, a son of the late Irwin A. and Carrie Whitmeyer Miller. Harold was an Army Veteran of WWII. He was a retired roll shop foreman for the Bethlehem Steel Corp Lebanon Plant. He was a 1945 graduate of Lebanon High School where he was active in the bands and sports, especially tennis. Harold played semi-pro baseball. At one time he ranked 4th in the nation as a Badminton player, having won the National Championship. He was a member of the Central PA Sports Hall of Fame, being inducted into the Hall in 1981 for his tennis playing and achievements. He was a member of the Green Hill Racquet Club, US Tennis Assoc., and the American Badminton Assoc. He was a former member of the YMCA Board of Directors. Harold was a lifelong member of Bethany United Methodist Church, where he was active in the choir and played in the Sunday School Orchestra. In addition to his wife, Harold is survived by 17 nieces and nephews. He was preceded in death by brothers, Earl and Rodney Miller and sisters, Ethel Miller and Charlotte Goodman. Family and friends are respectfully invited to attend Harold's funeral services Thursday, January 24, 2013 at 11:00 AM from Porterfield-Scheid Funeral Directors & Cremation Services, Ltd., 890 Isabel Drive (next to Quentin Circle) Lebanon, PA 17042 with Rev. Nelson Alleman and Rev. Forrest Schwalm officiating. A viewing will be held Thursday beginning at 10:00 AM to service time at the funeral home. Interment will be made in Grand View Memorial Park, Annville. In lieu of flowers memorial remembrance in Harold's memory may be made to Bethany UM Church, 510 N. Hanover St., Lebanon, PA 17046.

The family of Harold E. Miller created this Life Tributes page to make it easy to share your memories.

Send flowers to the Miller family.