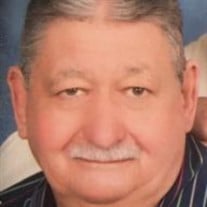 James A. Fennell, 72 of Fenelton died unexpectedly at home Friday afternoon March 13, 2020 as a result from a fall from a roof. Jim was born in Butler, PA on August 16, 1947, the son of the late Clarence J. "Sonny" and Helen Kravchuk Fennell. He was the husband of Janet K. Lias Fennell. Jim graduated from Butler High School, Class of 1965. He was drafted into the United States Army in 1966. He served for two years, stationed in Korea. Jim worked for Pullman Standard and Lezzer Lumber. He became an armed security guard working for Citizens Transport, Beaver County Social Security Office and for the pipelines. His favorite job was driving bus for BART, he enjoyed his passengers and had many stories to tell. Jim was an outdoorsman, he enjoyed hunting, trapping, raising beagles and fishing. He was a life member of the Happy Hunters Sportsmen's Club where he was on the Pool League, activities, picnic, grounds and ticket committees. Jim was the Butler County delegate for the Pennsylvania Federation of Sportsmen & Conservationists. He was a Pennsylvania Game Commission Hunter Education Instructor for the past 15 years. He served as a parade marshal for several years for the Chicora Memorial Day Parade. Jim was a life member of VFW Post 249, Butler, American Legion Post 828, Worthington and the East Butler Volunteer Fire Company. He was a member of the Fenelton United Methodist Church. A bit misunderstood at times, Jim was a straight shooter, struggled to show his feelings but those that truly knew him, understood him. He enjoyed his friends at the Happy Hunters, teaching the young about hunting, going to the casino and playing the lottery. Jim is survived by his wife, Janet; his son, Michael Todd Fennell of Columbia, PA and his daughter, Melanie Beth Fennell Scheid of Lancaster, PA; his grand doggies and several nieces and nephews. Jim was preceded in death by his brother, Thomas W. Fennell; his sisters, Elizabeth Ann Swartzlander, Carole C. Barnes, and Janet E. Reeder and his dachshund, Jager. Family and friends will be received at the Happy Hunters Sportmen's Club, 676 Chicora Fenelton Rd., Fenelton, PA on Friday, March 20, 2020 from 5 to 8PM and on Saturday, March 21, 2020 from 10 to 11AM. Funeral Services will be Saturday at 11AM at the Happy Hunters. Interment will be held in the Worthington Lutheran Cemetery immediately following where military honors will be accorded. Please omit flowers, memorial remembrances may be made in Jim's memory to the Fenelton U.M. Church, 810 Clearfield Rd., Fenelton, PA 16034. For further information, please call 717-872-1779 or to submit an online condolence visit www.melaniebscheidfh.com. Funeral arrangements are in the care of Jim's daughter, Melanie B. Scheid Funeral Directors & Cremation Services, Conestoga & Lancaster, PA.

James A. Fennell, 72 of Fenelton died unexpectedly at home Friday afternoon March 13, 2020 as a result from a fall from a roof. Jim was born in Butler, PA on August 16, 1947, the son of the late Clarence J. "Sonny" and Helen Kravchuk Fennell.... View Obituary & Service Information

The family of James A. Fennell created this Life Tributes page to make it easy to share your memories.

James A. Fennell, 72 of Fenelton died unexpectedly at home Friday...

Send flowers to the Fennell family.