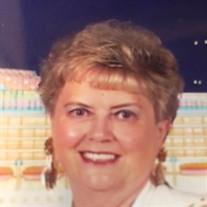 GRAN Janet Fulton Jack Janet Fulton (nee McCummiskey) Jack, 79, of West Lampeter Twp., passed away Thursday afternoon, August 30, 2018 at Lancaster General Hospital surrounded by her family after a brief illness due to complications from Rheumatoid Arthritis. Janet was born in Paisley, Scotland on September 6, 1938, the only daughter of the late John W. and Henrietta D. McKellar McCummiskey. She was the wife of Walter Hoggan Jack. They were married on October 15, 1960 at the Paisley Abbey. Janet attended Abercorn School in Paisley, Scotland where she was the top girl of her graduating class. Her first job was at Patons & Baldwins, Ltd., a textile factory in Scotland where she worked in production control. Walter and Janet immigrated to Philadelphia, PA in 1967. She worked most of her life in the States in the banking industry. She worked as a teller for First Pennsylvania Bank in Philadelphia. She retired from Citizens Bank in Willow Street as a branch manager. Janet and Walter loved to travel. They went on 42 cruises together. She had a large collection of teddy bears and enjoyed knitting. By far, Janet's favorite "job" was being Gran to her five grandchildren. She attended as many T-ball and soccer games, spelling bees, school plays, orchestra concerts and band events as possible. She was always available when her family needed her. Janet will be missed by her loving husband, Walter, who solely cared for her during her seven-year battle with Rheumatoid Arthritis; her daughter, Lorraine J. Kennedy, wife of John of Pequea; her son Gordon Jack, husband of Josephine of Chagrin Falls, OH, and the lights of her life: her grandchildren, Ian Kennedy of Philadelphia, Amanda Kennedy, wife of Stephen Thomsen of Pittsburgh, and Paisley, Robert, and William Jack of Chagrin Falls, OH. Janet is also survived by her brothers, John McCummiskey, husband of Janette, James McCummiskey and Duncan McCummiskey, husband of Margaret, all of Scotland. She was preceded in death by her brothers, James D. and Henry S. McCummiskey. Family and friends are respectfully invited to attend Janet's Funeral Services on Saturday, September 8, 2018 at 11:30AM from the Melanie B. Scheid Funeral Directors & Cremation Services, The Gundel Chapel, 3225 Main Street, Conestoga, PA. Friends will be received at the funeral home on Saturday from 10:30AM to 11:30AM. Please omit flowers; memorial remembrances may be made in Janet's memory to a favorite pet charity, as Janet loved animals of all kinds. For other information please call 717-872-1779 or to submit an online condolence please visit www.thegundelchapel.com. Gran, "Remember we love you even when we aren't with you!"

The family of Janet Fulton Jack created this Life Tributes page to make it easy to share your memories.

Send flowers to the Jack family.