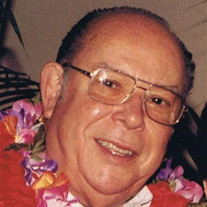 Joseph J. Repasch, 91, of Lebanon, passed away Wednesday, June 5, 2019 Spang Crest Manor, Lebanon. He was the husband of Janet R. Baughman (Kimmel) Repasch, to whom he was married October 19, 1999 in Honolulu, HI, and the late Betty J. Kreider Repasch, to whom he was married for 39 years and who passed away January 12, 1995. He was also the companion of the late Ethel N. Lehman Fies who passed away February 14, 1998. Joe was born in Fountain Hill on March 19, 1928, son of the late Julius and Rose Soulliard Repasch. He was a former employee of No-Mend Hosiery, Lebanon, Lebanon Valley Brewery and B.S. Corp Mine Bolt Dept. Joe retired in 1985 as a Supply Data Specialist at Navy Ships Parts Center, Mechanicsburg after 31 years of service. He continued working for the US Government in the Foreign Military Sales Department for the Spanish Navy from 1985 until 1999 when he retired permanently. Joe was a member of Salem Lutheran Church, Lebanon, Lebanon High School Class of 1946, life member of Lebanon Amvets, Lebanon VFW Post 23, Richland American Legion, Lebanon Senior Center, AARP, Friendship Fire Co and Lebanon Navy Club Ship 91. He served in the US Navy from 1946 to 1948 on the USS Portsmouth CL-102 and from 1951 to 1955 on the USS Beale DD-DDE-471. He enjoyed traveling, both foreign and domestic, visiting friends and family, attending stage shows locally and in Atlantic City. Also, he attended numerous ships’ reunions in the United States. Surviving in addition to his wife Janet, are his daughter, Dawn Gassert of Fredericksburg, step-daughter, Karen, wife of Jack Parson of York, step-sons, David Kimmel and wife Elizabeth of Enola, Mark Kimmel and wife Kimberly of Colorado Springs, CO, and Joel Kimmel and wife Mary of Hagerstown, MD, 2 grandchildren, 3 great grandchildren, 13 step-grandchildren, 15 step-great grandchildren , half-brothers Robert, Richard, Francis, Gerald and half-sister Julie, all of the Lehigh area. Family and friends are respectfully invited to attend Joe’s funeral service on Wednesday, June 12, 2019 at 10 AM from Porterfield-Scheid Funeral Directors & Cremation Services, Ltd., 890 Isabel Dr., Lebanon (next to Quentin Circle) with the Rev. Dr. Roger A. Bucy officiating. A viewing will be held Wednesday beginning at 9 AM at the funeral home. Interment with full military honors will be made in Indiantown Gap National Cemetery.

Joseph J. Repasch, 91, of Lebanon, passed away Wednesday, June 5, 2019 Spang Crest Manor, Lebanon. He was the husband of Janet R. Baughman (Kimmel) Repasch, to whom he was married October 19, 1999 in Honolulu, HI, and the late Betty J. Kreider... View Obituary & Service Information

The family of Joseph J. Repasch created this Life Tributes page to make it easy to share your memories.

Send flowers to the Repasch family.