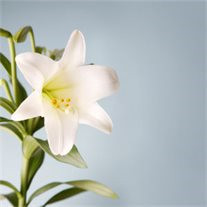 Lela L. Baney, 83, Lebanon, passed away Wednesday, October 24, 2012 at the Good Samaritan Hospital, Lebanon. She was the wife of John A. Baney, whom she married November 24, 1948. She was born in Lebanon on March 5, 1928, a daughter of the late Maurice B. and Jennie V. Hassler Lawrence. She had been employed by the former Steffy Shoe Co, The Bon Ton and retired in 1985 from Sterling Drug. Lela was a member of St. Matthew Lutheran Church, Lebanon, where she had been active for many years. She enjoyed reading, cooking for her family and friends and enjoyed helping other others. In addition to her husband she is survived by daughters, Jennifer, wife of Richard Graziano, Cobbs Creek, VA; Susan, wife of Dr. D. Mark Potter, Lebanon; 3 grandchildren; 4 great grandchildren, to whom she was known as "Nana"; a brother, Donald, husband of Viola Lawrence, Hershey; several nieces and nephews. She was preceded in death by sisters, Ellen Lawrence, Beatrice Weidle and Leone Troain. Private funeral services are to be held. Memorial contributions in Lela's memory may be made to St. Matthews Lutheran Church, 534 E. Lehman St., Lebanon, PA 17046.

The family of Lela L. Baney created this Life Tributes page to make it easy to share your memories.

Send flowers to the Baney family.