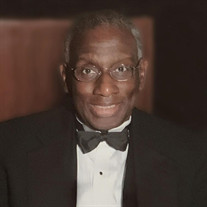 Leonard Washington, Jr., departed this life and joined the ancestral plane on May 28, 2020 at the age of 79. He was born on October 6, 1940 in New Orleans, Louisiana, to the late Leonard and Melba (Hill) Washington. He was preceded in death by his brother Leroy Elliott Washington of New Orleans, LA. Leonard graduated from Walter L. Cohen High School in New Orleans. He continued his education at Dillard University in New Orleans, Howard University in Washington, DC, and Northwestern University Kellogg School of Management in Evanston, IL with a Bachelor of Arts, Master of Social Work and Master of Business Administration degrees respectively. He joined the staff of the Lebanon VAMC in 1963 as a social worker. In 1969, he moved to Illinois where he was appointed Supervisory Social Worker at the North Chicago VAMC. During the 1970s and early 80s, he held several federal government assignments of increasing responsibility: Hospital Administration Specialist at the VA Central Office in Washington, DC; completed Assistant Director training at the Shreveport LA VAMC; Assistant Director at the Canandaigua, New York VAMC; and the Associate Director at the Brecksville, Ohio VAMC. In 1982, he returned to the Lebanon VAMC where he served as CEO until retiring in December 1998. For 34 years, Leonard had made it his mission to care for the heroes who had placed their own lives on the line to present the freedom we all enjoy. As the CEO of the Lebanon VAMC, his record of excellence is well documented in Central Pennsylvania and Washington, DC. He committed the VAMC to provide more than just medical service; he made sure the Lebanon VAMC head presence in the community and the region. Under his guidance, the Lebanon VAMC introduced the first mobile screening van in the region, the Camp Hill Outpatient Clinic and a Substance Abuse Unit. These merely scratch the surface of his illustrative accomplishments. In spite of his busy schedule, he served on several boards and in many community organizations. He was a member of the original planning committee which designed the Leadership Lebanon Valley Program and served as a board member of the Lebanon Valley Chamber of Commerce. In addition, he was honorary chair of the 1998 Relay for Life in Lebanon and a member of the Lebanon Rotary. He was chair of the Government Relations Committee for the South Central Pennsylvania Chapter of the Multiple Sclerosis Society and retired in 2018 from the board of The United Way of Lebanon County after 35 years. He is a proud 60 year member of the Omega Psi Phi Fraternity active in the Kappa Omega Chapter and a proud member of the Beta Pi Boule of the Sigma Pi Phi Fraternity. In his spare time, he had been active in area theater productions including the Lebanon Community Theater, Mt. Gretna Playhouse and the Theater of the Seven Sisters. He especially enjoyed his work with Directors Art Ford and the Kreider Brothers. After his retirement, Leonard was able to continue with his love of traveling, gardening, cooking and reading. In addition to spending time with his family, he immensely enjoyed his Breakfast Prayer Group, the VAMC Dinner/Luncheon Group and his longstanding outings with Phil Feather and Lee Sholly. Leonard was a faithful and active member of Trinity United Methodist Church where he willingly took on leadership positions in the church as Lay Reader, Chair of the Pastor Parish Committee, Choir Member, Men’s Breakfast Leader and served on local and district committees. Leonard received many honors, recognitions and awards, most notably the Founders Day Award from Lebanon Valley College. The Founders Day Award recognizes people whose character and leadership contributed to the enhancement of life in Central Pennsylvania. Leonard’s energy, discipline and selfless years of service have touched many lives directly and indirectly. His smile, wit and dry humor will be missed by his family and friends. He is survived by his wife of 56 years, Albertine (Tina) Washington; his children: Henry C. Moore and wife Stephanie of La Place, Louisiana; Tracy Felton and husband George (Ammioz) of Suitland, Maryland; and Troy Washington and wife Kim of Upper Marlboro, Maryland. He was a blessed grandfather to five grandchildren: Henry C. Moore, Jewllecia Moore, Priel Felton, Logan Washington and Landon Washington. Leonard is also survived by his sister, Myrtle Duffel and her husband Anthony of Marina, CA, his uncle Alfred Washington and special cousin Jazzette Washington of New Orleans, LA, and many nieces, nephews, cousins and scores of wonderful friends. A Celebration of Leonard’s Life is planned for the fall. Additional details will be made public at a later date. In lieu of flowers, please send donations in memory of Leonard Washington Jr., to SAFE FUNDS, Dillard University Office of Development, 2601 Gentilly Blvd, New Orleans, LA, 70122 or the American Cancer Society. Arrangements entrusted to Porterfield-Scheid Funeral Directors & Cremation Services, Ltd., Lebanon. To share on line condolences please visit www.porterfieldscheidfh.com

Leonard Washington, Jr., departed this life and joined the ancestral plane on May 28, 2020 at the age of 79. He was born on October 6, 1940 in New Orleans, Louisiana, to the late Leonard and Melba (Hill) Washington. He was preceded in death... View Obituary & Service Information

The family of Leonard Washington Jr. created this Life Tributes page to make it easy to share your memories.

Leonard Washington, Jr., departed this life and joined the ancestral...

Send flowers to the Washington family.