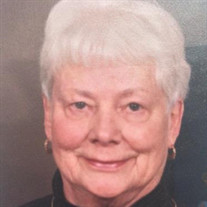 Martha Davis (Marty), formerly of Millersville, passed away peacefully at the Mennonite Home on August twenty-fifth. She was ninety-four. Born in Weatherly, PA, she was the daughter of George and Merle Doleiden. Upon her graduation from Weatherly High School, she attended Abington Memorial Hospital Nursing School where she met her husband Donald Davis. They were married in 1949 and were together for fifty-six years until his death in 2005. Early in their marriage the couple lived in Hatfield, PA where Marty was a homemaker and was active in church and community functions. She notably started the 4-H club in that community and influenced many young girls on the joy and benefits of sewing. The family moved to Millersville, PA in 1967. In the 1970’s, Marty returned to nursing at the infirmary of Franklin and Marshall College. Marty was a member of Grace Community Church, Millersville and their quilting group and the Millersville University Campus Club. She participated in the Campus Club's craft group which met for over forty years. She was known for her generous nature, her hospitality, and her love of animals. Surviving Marty are a son, Dr. Donald Davis (Beth) Millersville, MD, a daughter, Susan Chambers (Jeff) Lancaster, PA, grandchildren, Christopher Davis (Megan) Annapolis, MD, Matthew Davis (Jennifer) Catonsville, MD, Laura Ligo (Joseph) Shrewsbury, PA and two great grandchildren Elliott And Arlo Davis. The family would like to thank the staff at the Mennonite Home Lititz Run and the Hospice team for their loving care of Marty. Contributions in Marty's name can be made to the Humane League or the Alzheimer's Association. A memorial service will be conducted at a future date. A memorial service for Martha (Marty) Davis who died on August 25, 2021, will be held on Saturday, November 20th, at Wayside Presbyterian Church, 600 Stony Battery Road, Landisville, Pennsylvania. Visitation with the family will begin at 10:00am., followed by the service at 11:00am. A luncheon will be held at the Lancaster Tennis and Yacht club, 2615 Columbia Avenue, Lancaster, Pennsylvania after the service. Please omit flowers. Donations in Marty's name can be sent to the Humane League or the Alzheimer's Association.

Martha Davis (Marty), formerly of Millersville, passed away peacefully at the Mennonite Home on August twenty-fifth. She was ninety-four. Born in Weatherly, PA, she was the daughter of George and Merle Doleiden. Upon her graduation from Weatherly... View Obituary & Service Information

The family of Martha (Marty) Davis created this Life Tributes page to make it easy to share your memories.

Send flowers to the Davis family.