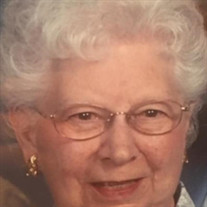 Nancy A. Herr, 86, formerly of Millersville passed away Tuesday morning, January 12, 2021 at St. Anne's Retirement Community where she resided for the past several years. Born in Bausman on March 6, 1934, she was the daughter of the late J. Raymond and Alice Mentzer Alexander. She was the wife of Henry M. Herr who preceded her in death on March 25, 2015. Nancy was a 1952 graduate of Penn Manor High School. She retired from Millersville University where she was employed for over 25 years. Nancy was a dedicated church member and belonged to the former First UM Church of Millersville, now Millersville Community UMC. Nancy enjoyed volunteering with the Millersville Meals on Wheels and was a member of the former James Buchanan Chapter, Order of the Eastern Star. She and Henry enjoyed traveling and attending Central Manor Campmeeting. Nancy loved being with her family and her children and grandchildren were her pride and joy. She will be missed by her son, Thomas A., husband of Kelly J. Bortzfield of Lancaster; daughter, Susan E., wife of William K. Heisey of Rehoboth Beach, Delaware; step son, Richard H. Herr of Pennsylvania and step daughter, Stephanie L., wife of Robert Godfrey of Florida. Nancy is also survived by her grandchildren, Arden, wife of Jeremy, Dane,husband of Stephanie, Nathaniel, husband of Christin and Andrew, husband of Patricia; her great grandchildren, Brooke, Asher, Jeremiah, Alice, Melody and Beckham; her sister, Fay L., wife of John A. Deibert of Millersville and sister in law, Janet Alexander-Habecker of Millersville. She was preceded in death by her brother, Robert Alexander. Family and friends are respectfully invited to attend Nancy’s funeral service on Monday, January 18, 2021 at 11AM from the Melanie B. Scheid Funeral Directors & Cremation Services, 3225 Main Street, Conestoga, PA with Mary Burger officiating. Friends will be received at the funeral home on Monday from 9:30 to 11AM. Interment will be held in the Conestoga Memorial Park . Memorial remembrances may be made in Nancy’s memory to the Millersville Meals on Wheels, 121 N. George Street, Millersville, PA 17551. For other information please call 717-872-1779 or to submit an online condolence visit www.melaniebscheidfh.com.

Nancy A. Herr, 86, formerly of Millersville passed away Tuesday morning, January 12, 2021 at St. Anne's Retirement Community where she resided for the past several years. Born in Bausman on March 6, 1934, she was the daughter of the late J.... View Obituary & Service Information

The family of Nancy A. Herr created this Life Tributes page to make it easy to share your memories.

Nancy A. Herr, 86, formerly of Millersville passed away Tuesday...

Send flowers to the Herr family.