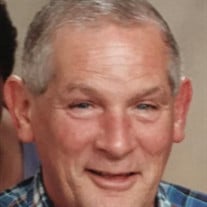 Nicholas G. “Nick” Krause, 79 of Millersville passed away at home Monday morning, August 16, 2021. Born on July 6, 1942 in Lancaster, he was the son of the late Nicholas and Anna Smith Krause. He was the husband of Darlene M. Bleacher Krause, with who he married on October 3, 1964. Nick retired from being a truck driver for many years. He drove for Shawnee and Central Penn. Earlier in life he was a carpet installer. He enjoyed going to the casino, watching horse racing and he would be found nearly every morning at McDonald’s at Manor Shopping Center. Tricky Nick as called by some was a prankster who liked to have fun. Nick will be missed by his wife, Darlene; son, Kevin E., husband of Regina K. Krause of Bristow, Virginia and his daughter, Kimberly A., wife of Chuck Courtney of Lancaster. Sneaky Pappy will be missed by his grandchildren, Nadine, Nicole, Chris, Michael, Shaelyn and Kayleigh and 8 great grandchildren. Nick was preceded in death by his sister, Doris Leier and his brother, Charles E. Krause. Family and friends are respectfully invited to attend Nick’s graveside services on Saturday, August 21, 2021 at 10AM in the Millersville Mennonite Cemetery with Mary Burger officiating. For other information, please call 717-872-1779 or to submit an online condolence visit www.melaniebscheidfh.com.

The family of Nicholas G. "Nick" Krause created this Life Tributes page to make it easy to share your memories.

Nicholas G. “Nick” Krause, 79 of Millersville passed away at...

Send flowers to the Krause family.