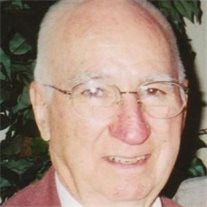 Paul E. Boger, 85, Lebanon (Quentin), passed away Tuesday, March 6, 2012 at the Hershey Medical Center. He was the husband of Dorothy J. "Dottie" Plasterer Boger, to whom he was married for 43 years. He was born on September 17, 1926 in Lebanon Co., son of the late Ezra and Estella George Boger. He was a graduate of Cornwall High School. He was a Navy Veteran of WWII. After retiring from the Lebanon County Housing and Redevelopment Authority with ten years of service as a carpenter, he was a self- employed contractor. He was a member of Tabor United Church of Christ, Lebanon, a life member and past commander of Annville American Legion Post 559 and the last surviving charter member of the Log Hollow Club, Potter Co. Paul is survived in addition to his wife by sons, Robin L., husband of Anita Boger, Garfield, NE; David R., husband of Juanita Boger, Palmyra; daughters, Lynn M., wife of Thomas Brewer, Manheim; Donna M., wife of Mark Ricketts, Lititz; 13 grandchildren; 4 great grandchildren; sister, Emma Phillips, Lebanon and brother, Russell, husband of Karen Boger, IL. He was preceded in death by brothers, Francis, Walter, Theodore Claude Boger and sisters, Dorothea Lane and Grace Kramer. Family and friends respectfully invited to attend Paul's funeral services on Friday, March 9, 2012 at 7 PM from Ruffner-Porterfield Funeral Directors & Cremation Services, Ltd., 890 Isabel Dr., (next to Quentin Circle), Lebanon, with Pastor Michael Klahr officiating. A viewing will be held Friday from 5 to 7 PM at the funeral home. Traditional Casket Burial will be made in the Cornwall Cemetery. In lieu of flowers memorial remembrances in Paul's honor may be made to the Memorial Fund of Tabor UCC, 10th & Walnut St, Lebanon 17042.

Paul E. Boger, 85, Lebanon (Quentin), passed away Tuesday, March 6, 2012 at the Hershey Medical Center. He was the husband of Dorothy J. "Dottie" Plasterer Boger, to whom he was married for 43 years. He was born on September 17, 1926 in Lebanon... View Obituary & Service Information

The family of Paul E. Boger created this Life Tributes page to make it easy to share your memories.

Send flowers to the Boger family.