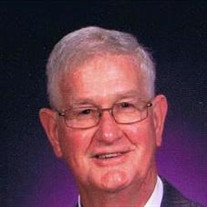 Paul Gundrum, Jr., 88, of Lebanon passed away at his residence Saturday, April 6, 2019. He was the husband of Patricia A. Monahan Gundrum whom he married April 21, 1951. Paul was born in Lebanon on March 8, 1931, son of the late Paul D., Sr. and Ethel Wilhide Gundrum. He was a 1949 graduate of Lebanon High School. Paul was a US Navy Veteran of the Korean War. He retired from the Lebanon City Police Department in 1973 and later worked 25 years in retail sales at Boscov’s, Lebanon. Paul enjoyed fishing, the outdoors and crocheting. In addition to his wife, Paul is survived by his son Paul F. Gundrum of Lebanon, his daughters, Sharon L., wife of Scott Galand of Fait Chance, Carol L., wife of Mark Wisniewski of Bristol, VA, his grandchildren, Elliott Galand, Ethan Galand, Patrick Gundrum, Sara Gundrum and his sister, Grace, wife of Clayton Shuey of Lebanon. He was preceded in death by brothers, George, Carl and Herman Gundrum and sister Eleanor Ream. Family and friends are respectfully invited to attend Paul’s memorial service on Thursday, April 11, 2019 at 11 AM from St. James Lutheran Church, 2nd and Chestnut St., Lebanon. Friends will be received following the service. Interment will be made in Indiantown Gap National Cemetery. Please omit flowers. Memorial contributions may be made in Paul's memory to St. James Lutheran Church. 35 Chestnut St., Lebanon 17042. Arrangements entrusted to Porterfield-Scheid Funeral Directors & Cremation Services, Ltd., Lebanon. For further information please call 717-272-4634 or to share on line condolences visit www.porterfieldscheidfhcom

The family of Paul Gundrum Jr created this Life Tributes page to make it easy to share your memories.

Paul Gundrum, Jr., 88, of Lebanon passed away at his residence...

Send flowers to the Gundrum family.