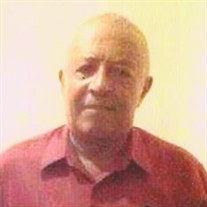 Ramon Navarro Rodriguez, 81 of Lancaster passed away June 17, 2021 at Lancaster General Hospital. Born on August 30, 1939 in Villa Altagracia San Cristobal, Dominican Republic, he was the son of the late Ramon Navarro and Eduarda Rodriguez. Ramon was the husband of Valentina DeLeon Reyes with who he married on August 14, 1963. Ramon worked as a farmer in his home country. He loved spending time with his family, eating and playing dominos. Ramon will be missed by his wife, Valentina; sons, Eddie, husband of Leocadia Navarro of Lancaster and Juan Agusto Navarro of Lancaster; daughters, Virginia, Odali Navarro, both of Lancaster, Gladi, Vernirda and Maria Teresa Navarro, all of Dominican Republic, Reyita Navarro of Miami and Magali Navarro of New York. He is also survived by 22 grandchildren and 10 great grandchildren. Roman is also survived by his brothers, Felipe, Demetrio and Jose Antonio Navarro. He was preceded in death by his sisters, Felida and Aurora and brothers, Inocencio and Male. Family and friends are respectfully invited to attend Ramon's funeral services on Wednesday, June 23, 2021 from 6 to 8PM and on Thursday, June 24, 2021 from Noon to 2PM from the Melanie B. Scheid Funeral Directors & Cremation Services, 317 E. Orange Street, Lancaster, PA. Interment will be held in the Mellinger's Mennonite Cemetery.

The family of Ramon Navarro Rodriguez created this Life Tributes page to make it easy to share your memories.

Send flowers to the Rodriguez family.