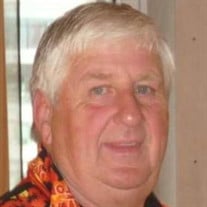 Richard J. Brodbeck, Sr., 76 of Manor Township passed away at Susquehanna Nursing and Rehab, Columbia on Monday morning, February 7, 2022. Born in Freeport, New York on April 10, 1945, he was the son of the late William J. and Myrtle L. Pitterman Brodbeck. He was the husband of Mary "Connie" Woelfle, with whom he married on May 3, 1969. Rich served in the United States Navy from 1964 to 1968 aboard the USS Kittyhawk. He was a great salesman and enjoyed being in sales for the majority of his life. He had worked for Stewart Enterprises in the cemetery and monument division for several years, which the job took Rich and his family to many different states. He also worked for Gerkin Chevrolet and the Tile Showplace. He was most recently a self employed parcel carrier up until his illness. He was last employed as a contractor with Friendly Messenger. Rich was a member of the Millersville VFW Post #7294. He loved his dogs, Freddie, Macky and Bette, he would often take Freddie on his carrier routes. Rich loved to take photos and often would stage areas to do so. He enjoyed sailing, golfing, garage sales and dumpster diving. He never passed anything up that was "free". He loved vacationing with his family, taking cruises and camping at Muddy Run. Rich will be deeply missed by his wife, Connie; son, Richard J. "Rick" Brodbeck, Jr. of Lancaster; daughters, Elisabeth A., wife of Billy Mowery of Lancaster and Barbara L., wife of William Giblin, Jr. of Mount Joy; grandchildren, Errik, Austin, Andrew, Madelyn, Owen, Nathan, Mary Kate and Jordynn and his brother, William Brodbeck of Kyle, Texas. Rich was preceded in death by his grandson, Matthew B. Brodbeck. Family and friends are respectfully invited to attend Rich's funeral service on Saturday, February 12, 2022 at 3PM from the Melanie B. Scheid Funeral Directors & Cremation Services, 317 E. Orange Street, Lancaster. Military honors will be conducted at the funeral home. Friends will be received at the funeral home on Saturday from 2 to 3PM. Please omit flowers, memorial remembrances may be made in Rich's memory to A Tail to Tell Puppy Rescue, PO Box 524, Mt. Gretna, PA 17064 or to the Humane League of Lancaster County, 3195 LIncoln Hwy East, Lancaster, PA 17602. For other information, please call 717-393-1776 or to submit an online condolence visit www.melaniebscheidfh.com.

Richard J. Brodbeck, Sr., 76 of Manor Township passed away at Susquehanna Nursing and Rehab, Columbia on Monday morning, February 7, 2022. Born in Freeport, New York on April 10, 1945, he was the son of the late William J. and Myrtle L. Pitterman... View Obituary & Service Information

The family of Richard J. Brodbeck Sr. created this Life Tributes page to make it easy to share your memories.

Richard J. Brodbeck, Sr., 76 of Manor Township passed away at...

Send flowers to the Brodbeck family.