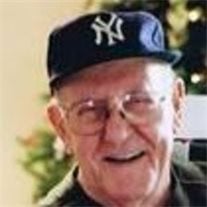 Richard L.Richard L. "Bud" Roland, 91, Dallastown, formerly of Lebanon, passed away Tuesday, June 26, 2012 at Manor Care Dallastown, after a brief illness. He was the husband of his beloved late wife, Charlotte "Dolly" S. Bashore Roland, whom he married in 1940 and who passed away in 2004. Richard was born in Lebanon on September 16, 1920, a son of the late Albert and Emma Peters Roland. Richard was a WWII Navy Veteran, serving as a Gunner's Mate First Class. He was a loving, hard-working man who dedicated his life to his family and friends. As a young man, he worked in and later owned the family business, Roland & Son Ice Co. Later he worked for Lebanon Valley Offset, retiring from there at the age of 72. He was a member of Tabor United Christ of Christ Lebanon, Lebanon VFW Post 23, Lebanon American Legion Post and Young Democratic Club. In his younger years he enjoyed fishing, hunting, travel and horseback riding. He also enjoyed animals, gardening and yard work, which he did up to his last days. He was one of the "Greats" that made his the "Greatest Generation" Richard is survived by daughters, Sandra L., wife of David Schell, Annville; Susan J. Baker, Dallastown, with whom he shared a home after the passing of his wife, grandchildren, Lisa A. Mannix, Glenmoore; Kirsten S. Bomberger, Glenmoore; Adrianne L. Shaver, Palmyra; Richard M. Klein, Glassboro, NJ; Jennifer S. Craddock, Richmond, TX; 7 great grandchildren and brother, Clifford A. Roland, Sr., Lebanon. He was preceded in death by a sister, Christine Kennedy. Family and friends are respectfully invited to attend Richard's funeral services on Friday, June 29, 2012 at 10:00AM from Porterfield-Scheid Funeral Directors & Cremation Services, Ltd., 890 Isabel Drive, (next to Quentin Circle), Lebanon with Pastor Michael Klahr officiating. A viewing will be held Friday at 9:00 AM from the funeral home. Burial will be made in Indiantown Gap National Cemetery. In lieu of flowers memorial remembrance in Richard's memory made be made to the DAV, P.O. Box 14301, Cincinnati, OH 45250-0301. For further information please call 717-272-4634 or to share on line condolences visit www.porterfieldscheidfh.com .

The family of Richard L. "Bud" Roland created this Life Tributes page to make it easy to share your memories.