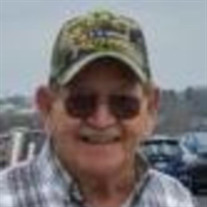 Today in heaven, May 31, 2021 Richard L. "Dick" Geib, was reunited with his beloved wife, Charlotte. They were without each other for 14 months, the longest time in 67 years. We are sure they had the most beautiful and loving reunion! This is a very happy time for our Mom and Dad, yet a very sad time for us and our family as we miss our folks so very much - they were so loved! Dad worked very hard throughout his life. First as a farmer tending his fields and livestock, serving his country for four years during the Korean war, working as a long time employer all the while raising his family-his most rewarding job. Dad found such pleasure in the simple things in life. He spent his "golden" years watching a spider spin it's web, ants building their mounds of dirt, watching beautiful sunrises and sunsets and watching the eagles soar. He loved tinkering with his tractors and fleet of lawn mowers many of which were given to Missy. One of his favorite past times was simply shooting the breeze with his family and friends and telling the best of stories. His most captive audience was his precious "princess", his grand-daughter Gretchen. His laughter was contagious especially if he could pull one over on you. How he loved playing practical jokes on everyone and always trying to get your "goat" as he put it. Always ready to lend a helping hand and giving his last dime if you needed it, even to those he did not know, never expecting anything in return. Dad had one of the most generous hearts and probably never realized the beautiful impact he had on so many. He was a man of the best of character and integrity, an amazing teacher and mentor, very much a diamond in the rough. His lessons in life are invaluable as he would bestow his words of wisdom. He had such an amazingly positive attitude that couldn't help rub off on those near. If you were ever down and out go see the "ole boy", guaranteed you will feel much lighter! Dad's stories and his loving nature will live long in the hearts of many. How blessed we are to have known him and be a part of his life! Soar high with the eagles Dad! Enjoy a knicker or two. We are so proud and honored to have had you as our Dad and Pappy! Love you forever. As you told us this is not good bye - it's I'll catch ya later! Dick will be missed by his daughters, Michele L. "Missy" Geib of Lancaster and Kimberly J. Mowery of Ephrata; granddaughters, Shelly Himes and Gretchen, wife of Zach Margoline and great grandchildren, Olivia and Jeffrey. He was preceded in death by his son, Jeffrey Geib; granddaughter, Heather Arnold; brothers, Ted, Jack, Bob, Bill, Henry and George and his sisters, Aida, Mabel, Mary, Agnes and Dorothy. Funeral Services will be private at the convenience of the family as per Dick's wishes. Casket burial will be held in the St. Joseph's Catholic Cemetery with military honors being performed.

Today in heaven, May 31, 2021 Richard L. "Dick" Geib, was reunited with his beloved wife, Charlotte. They were without each other for 14 months, the longest time in 67 years. We are sure they had the most beautiful and loving reunion! This... View Obituary & Service Information

The family of Richard L. "Dick" Geib created this Life Tributes page to make it easy to share your memories.

Send flowers to the Geib family.