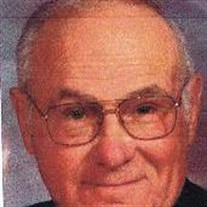 Richard L. Grimes, 94, of Cornwall Manor, Cornwall, passed away Saturday, April 6, 2019 at Lebanon Wellspan Good Samaritan Hospital. He was the husband of Anna Mae Koehler Grimes. Dick was born in Lebanon on April 14, 1924, son of the late Charles W. and Hazel Mae Brown Grimes. He was a 1942 graduate of Lebanon High School. Dick was a US Navy Veteran of WWII where he was a ka mi ka ze survivor. He was the retired owner of Grimes Grocery Store on N. 5th St and Margie’s Laundromat. Dick was a member of St. Mark’s United Church of Christ, Lebanon where he was a member of the Hymn Singers. He was a member of Mt. Lebanon Lodge F&AM, Lebanon, York Rite Bodies of Lebanon, Harrisburg Consistory, Zembo Temple, Tall Cedars of Lebanon Forest 25, and had played semi-pro football with the Lebanon Rams. In addition to his wife, Dick is survived by a daughter Shelly Ann, wife of Dennis Buck of Annville, grandchildren, Adam Buck of VA, Jennifer, wife of Bryan Spickler of Hanover, 3 great grandchildren, his brother, Daniel, husband of Patricia Grimes of Cornwall, his sisters, Ethel, wife of Samuel Youse of Lititz and Jeanette Heim of Annville. He was preceded in death by his first wife Margaret Ovecka Grimes who passed away in 1991, his brothers, Harold and Robert Grimes and his sister Joyce Elaine Grimes. Family and friends are respectfully invited to attend Dick’s memorial service Friday at 11 AM from St Mark’s UCC, 426 N. 8th St, Lebanon with Rev. David Jones officiating. Friends will be received following the service at the church. Interment will be made in Indiantown Gap National Cemetery. Please omit flowers. Memorial contributions in Dick’s memory may be made to St Mark’s UCC, 426 N. 8th St, Lebanon 17046. Funeral arrangements entrusted to Porterfield-Scheid Funeral Directors & Cremation Services, Ltd., Lebanon. For further information call 717-272-4634 or to share on line condolences visit www.porterfieldcheidfh.com

The family of Richard L. Grimes created this Life Tributes page to make it easy to share your memories.

Send flowers to the Grimes family.