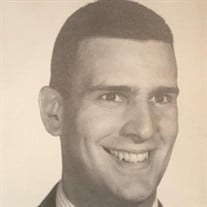 Richard C. Smith, Jr., 79 of Lancaster passed away at Manor Care Nursing and Rehab on Friday evening, January 15, 2021. Rick was born in Lancaster on September 27, 1941, the son of the late Richard C., Sr. and Lilian M. Smith. He was the husband of Lenore R. Young Smith who he married on January 31, 1964. Rick was a lifelong Lancaster County resident. He graduated from J.P. McCaskey High School in 1959, received his Bachelor of Arts from Elizabethtown College in 1965 and obtained his Master in Education from Temple University in 1969. He was a member of Community United Methodist Church, where he served on several committees and taught Sunday School. He had worked for his wife's family business, The Young Funeral Home for a short time before beginning his career with Lancaster Press. Rick worked for over 40 years for Lancaster Press and its successor companies, retiring in 2010. He also enjoyed volunteering as a tour guide for the Historic Lancaster Walking Tour during the 1970’s, 80’s and 90’s. Rick is survived by his wife, Lenore Y. Smith; his sons, Richard C. Smith, III of Pittsburgh and William R. Smith of Aston; his daughter, Ruth A., wife of Jeff Herr of Strasburg and 3 grandchildren. He is also survived by his brother, Michael D., husband of Susan Smith of Lancaster and his sister, Karen E., wife of Ronald Sahd of Columbia and his nieces and nephews. He was preceded in death by his sister, Susan E. Smith. Family and friends are respectfully invited to attend Rick's funeral service on Thursday, January 21, 2021 at 11AM from the Melanie B. Scheid Funeral Directors & Cremation Services, 317 E. Orange Street, Lancaster with Rev. Harry Kaufhold, Jr. officiating. Friends will be received at the funeral home on Thursday from 10 to 11AM. Interment will be held in the Mellinger's Mennonite Cemetery. Please omit flowers, memorial remembrances may be made in Rick's memory to Community United Methodist Church, 130 Tennyson Drive, Lancaster, PA 17602. For further information please call 717-393-1776 or to submit an online condolence visit www.melaniebscheidfh.com. Melanie B. Scheid Funeral Directors & Cremation Services Lancaster & Conestoga

Richard C. Smith, Jr., 79 of Lancaster passed away at Manor Care Nursing and Rehab on Friday evening, January 15, 2021. Rick was born in Lancaster on September 27, 1941, the son of the late Richard C., Sr. and Lilian M. Smith. He was the husband... View Obituary & Service Information

The family of Richard C. Smith Jr. created this Life Tributes page to make it easy to share your memories.

Send flowers to the Smith family.