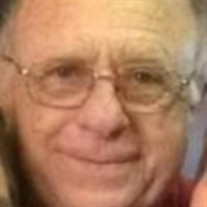 Robert D. Bortzfield, 75 of Pequea passed away Sunday morning, January 9, 2022 at Lancaster General Hospital. Born in Marticville on January 24, 1946, he was the son of the late Lloyd G. and Freda M. Mundorff Bortzfield. He was the husband of Patricia A. Rankin Bortzfield, with whom he married on July 27, 1968. Bob graduated from Penn Manor High School in 1963. He attended Marticville United Methodist Church. He soon began working for Wohlsen Construction after high school. He enlisted in the United States Navy in 1966 and served for 3 years. After serving in the Navy, he went back to Wohlsen Construction where he worked for over 43 years, lastly as a foreman. Bob enjoyed hunting and fishing, spending time at his cabin in Lycoming County and was a member of the Pequea Valley Sportsmen's Association. He enjoyed gardening, cooking and baking. He enjoyed time with his family at Ocean City, Maryland. Bob was a NASCAR fan and enjoyed both Dale Earnhardt and Dale, Jr. Bob had a heart of gold and was a very good man, helping whoever he could, whenever he could. He loved spending time with his family, especially his grandchildren. He will be deeply missed by his wife Patti; daughters, Traci L. Lucas of Pequea and Bobbi Jo Bortzfield of Conestoga; grandchildren, Christopher, Mason, Candice, Derick and Stevie; 4 great grandchildren and one on the way. Bob is also survived by his brothers, Lloyd G. "Red", husband of Gwendolyn Bortzfield of Strasburg and Harry R., husband of Shirley Bortzfield of Lancaster and nieces and nephews. Family and friends are respectfully invited to attend Bob's funeral service on Saturday, January 15, 2022 at 2PM from the Melanie B. Scheid Funeral Directors & Cremation Services, 3225 Main Street, Conestoga with Pastor Kevin Kresge officiating. Friends will be received at the funeral home on Saturday from 12:30 to 2PM. Military Honors will be performed at the funeral home. Interment will be held in the Marticville UM Cemetery. Please omit flowers, memorial remembrances may be made in Bob's memory to Pennsylvania Wounded Warriors, 1117 Country Club Rd, Camp Hill, PA 17011 or to the American Heart Association.

Robert D. Bortzfield, 75 of Pequea passed away Sunday morning, January 9, 2022 at Lancaster General Hospital. Born in Marticville on January 24, 1946, he was the son of the late Lloyd G. and Freda M. Mundorff Bortzfield. He was the husband... View Obituary & Service Information

The family of Robert D. Bortzfield created this Life Tributes page to make it easy to share your memories.

Send flowers to the Bortzfield family.