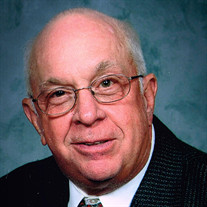 Robert 'Bob' Glenn Donley, 75, of Cornwall, PA, was joyfully received by his Savior in Heaven on January 4, 2020. Bob was predeceased by his first wife, Susan Ruth Yeakley Donley, and is survived by his second wife, Lucinda 'Lu' Scrimshaw Donley, with whom he would have celebrated 13 years of marriage on May 12, 2020. Bob is lovingly remembered by his sons, Robert Leighton Donley, husband of Reba Dieffenbach Donley, of Lebanon, PA, and Michael David Donley, husband of Nichole Comins Donley, of Palmyra, PA; six grandchildren, Trevor C. Donley, husband of Jacqueline O'Brien Donley, and Shannah N. Donley, son and daughter of Michael and Nichole, all of Palmyra, PA, and Robert Harold Donley, Seaman Recruit Reuben F. Donley, Richard N. Donley and Ray J. Donley, sons of Robert L. and Reba, all of Lebanon, PA; one great grandson, Caden Michael Donley, son of Trevor and Jacqueline; an uncle, Eugene Orner, husband of Nancy Orner, of Colorado; sister-in-law Deborah Miller, wife of Norman Miller, sister-in-law Robbin Townsend, wife of Paul Townsend, brother-in-law Tom Scrimshaw, husband of Colleen Scrimshaw, brother-in-law Jeffrey Scrimshaw, and several nieces and nephews. Bob was born in Cornwall, PA, to Leighton Smith Donley and Marian Orner Donley (Davis) and was raised among a fun crowd of friends in Minersvillage. He was confirmed at the Cornwall United Methodist Church where he later became a member and served as an usher. Bob graduated from Cornwall High School with many of the same friends from his childhood. Bob studied at Shippensburg State College, and proudly served for 4 years in the U. S. Air Force stationed in Germany with another amazing group of people. Bob was on leave when he met Sue, they were married and eventually moved to Main Street, Quentin, PA, where he was also a fire fighter with the Quentin Volunteer Fire Company. Bob was employed at the Lebanon plant of ALCOA for 35 years with more wonderful friends. He had another circle of friends in the Lebanon Masonic Lodge #704. In retirement, Bob found even more fantastic friends while working at Hersheypark and the GIANT Center. Bob and Lu enjoyed traveling, visiting historical sites, quiet weekend at their camper, cheering on grandchildren in their sporting and music events, and reminiscing at the Rough and Tumble Thresherman's Association Annual Reunions with still more friends. One of Bob's proudest achievements was the publishing of the photographic history of the Cornwall Ore Mines and miners in “Images of America: Cornwall” with his friend and cohort Charlie Boyer, a book that honored his father, Leighton, who worked in the mines and who amassed a famous rock and mineral collection that began as Bob's Boy Scout project. If the measure of a man is the number of his friends, Bob Donley was a colossal giant because of the vast group of amazing folks he called friends. Visitation will be held at Porterfield-Scheid Funeral Directors and Cremation Services, LTD., 890 Isabel Drive, Lebanon PA 17042, on Wednesday, January 8, 2020, from 6:00 p.m. to 9:00 p.m. A Masonic Service by Mt. Olivet Lodge #704, F&AM will be conducted Wednesday Evening, January 8, 2020 at 7 PM at the funeral home. The funeral service will be held at Cornwall United Methodist Church on Thursday, January 9, 2020, at 11:00 a.m. with visitation starting at 10:00 a. m. Interment at Indiantown Gap National Cemetery will be at the convenience of the family. A time for sharing a meal and telling stories for all family and friends will be held at Cornwall United Methodist Church following the funeral service. In lieu of flowers, memorial donations may be made to Lebanon County Special Olympics, P.O. Box 1018 Lebanon, PA 17042.

Robert 'Bob' Glenn Donley, 75, of Cornwall, PA, was joyfully received by his Savior in Heaven on January 4, 2020. Bob was predeceased by his first wife, Susan Ruth Yeakley Donley, and is survived by his second wife, Lucinda 'Lu' Scrimshaw Donley,... View Obituary & Service Information

The family of Robert Glenn "Bob" Donley created this Life Tributes page to make it easy to share your memories.

Send flowers to the Donley family.