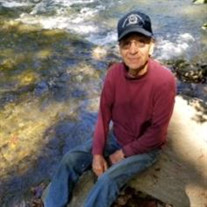 Robert A. Funk, 79 of Conestoga passed away Monday evening, November 16, 2020 at Lancaster General Hospital after a courageous battle with cancer. Bob was born on his grandparents farm in West Lampeter Township on October 19, 1941, the son of the late Sara E. Funk Baublitz. Bob lived and was raised on the family farm until he graduated from Lampeter Strasburg High School in 1959. Bob and his family moved to Conestoga Township in 1965. Bob married Linda J. Shaubach Funk on August 5, 1972. Bob and Linda bought the Phares Foutz farm on River Corner Road, Conestoga and he farmed there for over 40 years. Bob loved his farm, raising sheep, goats, steers and growing corn and hay. He enjoyed hunting, snowmobiles, classic cars, antique tractors, collecting old farm toys, square dancing and a longtime Phillies fan. His classic car entry in the 2019 Conestoga Car Show won him the People’s Choice Trophy. Bob worked for Lancaster Newspapers for over 38 years and retired from working in the pressroom. Bob served as Conestoga Township Supervisor for 12 years. He was a member of the Conestoga Fire Company, NRA and the Conestoga Historical Society. He was a 30+ year member of Bethel EC Church in Conestoga where he once served as worship leader and trustee. Bob was currently attending Grace Community Church of Willow Street. Bob was a pleasant, optimistic guy who made friends everywhere. He will be missed by many. He will be dearly missed by his wife, Linda; son, Rodney A., husband of Pernille Funk of Newnan, Georgia; daughters, Wendy J. Funk, Tammy L., wife of Brian Stambaugh of Millersville, Jenny M. Herman of Conestoga and 6 grandchildren and 2 great grandchildren. Bob is also survived by his brothers, Steven Baublitz of New Bridgeville and Ricky, husband of Sara Baublitz of Thompsontown; sisters, Patricia Johnson of New Holland, Debra, wife of James Weir of Dover and Barbara Smith of York. He was preceded in death by his son, Scott A. Funk and brother, Dennis Baublitz. Family and friends are respectfully invited to attend Bob’s funeral services on Monday evening, November 23, 2020 at 7PM from the Melanie B. Scheid Funeral Directors & Cremation Services, 3225 Main Street, Conestoga, PA. Friends will be received at the funeral home on Monday from 5 to 7PM. Please omit flowers, memorial remembrances may be made in Bob’s memory to The Healing Journey Foundation, c/o Lancaster Cancer Center, 1858 Charter Lane, Suite 202, Lancaster, PA 17602. For other information, please call 717-872-1779 or to submit an online condolence visit www.melaniebscheidfh.com. Melanie B. Scheid Funeral Directors & Cremation Services Conestoga & Lancaster

Robert A. Funk, 79 of Conestoga passed away Monday evening, November 16, 2020 at Lancaster General Hospital after a courageous battle with cancer. Bob was born on his grandparents farm in West Lampeter Township on October 19, 1941, the son... View Obituary & Service Information

The family of Robert A. Funk created this Life Tributes page to make it easy to share your memories.

Robert A. Funk, 79 of Conestoga passed away Monday evening, November...

Send flowers to the Funk family.