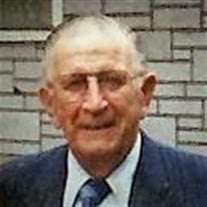 Robert P. “Bob” Gettle, 86, of Lebanon passed away Saturday, March 23, 2019 at his residence. He was the husband of Gladys Wolf Gettle whom he married August 9, 1958. Bob was born in Lebanon on June 18, 1932, son of the late Charles W. and Edna Ditzler Gettle. He was a 1950 graduate of Lebanon High School. A US Army Veteran of the Korean War, he had been a miner for the Bethlehem Steel Mines and later was employed by Roman Mosaic & Tile, Manheim. Bob was a member of Bethany United Methodist Church, Lebanon, where he had served on the Building and Maintenance Committee, and as an usher and former Boy Scout Leader. He was a member of the Mt. Lebanon Camp Meeting Association, serving on the refreshment stand committee. Bob enjoyed hunting, fishing and bowling. In addition to his wife, Bob is survived by his children Barbara A. Gettle, companion of Jorge Pardo of Lititz; Douglas R. Gettle and companion Angela Sneider of Orlando, FL; Stephanie M., wife of Scott R. Cichy of Lemoyne; Leon C. Gettle, husband of Karen Seeber of Camp Hill; 5 grandchildren; 2 great grandchildren; his brothers Karl, husband of Linda Gettle of Cornwall; Bruce Gettle, husband of Joanne Thomas of Mt. Gretna; Harry Greenawalt of Lebanon and his sister Caroll Gettle of Lebanon. He was preceded in death by his brothers William Gettle, Richard Gettle; his sisters Helen Hicksenheiser, June Gettle and his step-mother Kathryn Gettle. Family and friends are respectfully invited to attend Bob’s funeral services on Saturday, March 30, 2019 at 11 AM, from Porterfield-Scheid Funeral Directors & Cremation Services, Ltd., 890 Isabel Dr., Lebanon (next to Quentin Circle) with Rev. Dr. Donald C. Wetzel, Chaplain for Wellspan Good Samaritan Hospice officiating. Viewing will be held Saturday beginning at 10 AM at the funeral home. Interment will be made in Grand View Memorial Park. In lieu of flowers memorial contributions in Bob’s memory may be made to the Mt. Lebanon Camp Meeting Assoc., 1002 Kochenderfer Rd., Lebanon, PA 17046-2017.

The family of Robert P. "Bob" Gettle created this Life Tributes page to make it easy to share your memories.

Send flowers to the Gettle family.