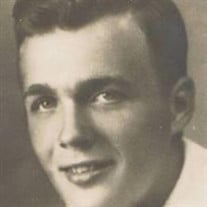 Robert Charles Kline, 95, of Lebanon, formerly of Gretna Springs, Ono and Reading, passed onto glory on Friday, April 10, 2020 at Cedar Haven. He was husband of the late Mary I. Emrich Kline who passed away April 12, 2017. Bob was born in Reading on October 14, 1924, son of the late Oliver S. and Ida Bankes Kline. He was a Navy Veteran of WWII serving in the Pacific serving on Destroyer # 739. He was an alumnus of the Philadelphia Biblical University. Bob retired in 1992 from the City of Lebanon Authority Wastewater Treatment Plant, where he had served as assistant superintendent and superintendent. He was also a graduate of the Wharton School of Business, University of Pennsylvania. He was a license stock broker working with Waddell & Reed. He also did Financial counseling with Christian Financial Concepts and his own business, Kline and Sons, Inc. Financial Consultants, where he authored a book. Bob also worked part-time in the office of Manheim Auto Auction from 1997 to 2008. He had served on the Northern Lebanon Authority for two years from 1990 to 1992 and from 1998 to 2008 on the West Cornwall Township Planning Commission. Bob’s memberships included The Eastern Pennsylvania Water Pollution Central Operators Association, Inc., VFW Post 5956 of Manheim and New Beginnings Grace Brethren Church, Myerstown. He enjoyed reading, especially the Bible, Family time and was an avid sports fan. Bob is survived by his children Douglas Kline of Wheaton, IL, Nelson, husband of Lori Kline of Brickerville, Sue A., wife of Dale Jones of Elizabethtown, Lois, wife of Dennis Maulfair of Lebanon, Audrey, Raynor of York, Betty Caylor of Enola, Faith Kline of Wernersville; 15 grandchildren and 11 great grandchildren. He is preceded in death by sons Roger and Gary Kline, his 6 brothers and sisters. Burial will be made in Indiantown Gap National Cemetery with memorial graveside services and military honors will be held at a later date to be announced. Please omit flowers. Memorial contribution in Bob’s memory may be made to The Friends of Israel Gospel Ministry, Inc., P.O. Box 908, Bellmawr, NJ 08099.

Robert Charles Kline, 95, of Lebanon, formerly of Gretna Springs, Ono and Reading, passed onto glory on Friday, April 10, 2020 at Cedar Haven. He was husband of the late Mary I. Emrich Kline who passed away April 12, 2017. Bob was born in... View Obituary & Service Information

The family of Robert Charles Kline created this Life Tributes page to make it easy to share your memories.

Send flowers to the Kline family.