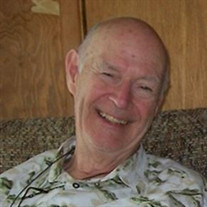 Robert “Rob” John McNamee, 85, of Lebanon PA, passed away on August 30, 2021 due to complications from a bad fall at home. Up until his last days, Rob maintained his signature smile and the twinkle in his eye. Rob was born on May 21, 1936 in Kingston Ontario, to Bernard A. McNamee (Lansdowne, Ont) and Mary Margaret Anne Gaudaur McNamee (Orillia, Ont). The second of six siblings, “Robin,” as he was affectionately nicknamed for his lively disposition, was raised in a traditionally intellectual, Jesuit-Catholic environment, in which he was encouraged to think creatively, to question everything, and to extend grace to all. He grew up surrounded by the forests and wildlife along the waterways of Seeley’s Bay, Ontario, and that made a lasting impression on him. As a young man, he attended Regiopolis Secondary School, Kingston and Saint Patrick’s College, Ottawa (later Carleton University) where he studied liberal arts and was a solid right wing on the hockey team. An accomplished piano and guitar player, Rob played in a rockabilly band and was known for his enthusiastic dancing style. After graduation from university, Rob emigrated to the United States, to follow and to marry his sweetheart, Jeanne Louise Wilder of Lebanon PA, in 1960. They would settle in North Cornwall Township and raise a family together. Rob was a career journalist and newspaper editor, attending Michigan State School of Journalism before enlisting in the US Navy from 1961-1963. Upon his return from Naval Air Station, Jacksonville Florida, Rob joined his wife’s family business, The Lebanon Daily News. Starting as a reporter and photographer, he was promoted to City Editor in the mid-60s, a position where he excelled for almost 20 years. During his time at the LDN, Rob mentored and encouraged developing journalists, giving many their start in the newspaper business. He was loved, respected and revered, and remembered as “larger than life” for his kindness, strength and professionalism and for “standing up for what he believed in.” Later in his career, he worked for the Pennsylvania House Republican Caucus and on the city desk at the Harrisburg Patriot News, eventually running a part-time public relations and consulting business until his retirement. Rob was committed to involvement in the Lebanon community, served on numerous non-profit boards and donated to local and national charitable causes close to his heart. An avid hunter and fisherman in his youth, as he mellowed, Rob emerged as a concerned environmentalist and lifelong lover of the natural world. In his later years, he was known to release his catch or to cook breakfast back at camp. Rob built a deer stand along the tree line of his home, so he could watch the deer in the cornfield, while enjoying a draught of single malt scotch and the beautiful Pennsylvania sunset. Although Rob was distinctly Canadian at the core, he was a proud American and appreciated his US citizenship. He did not shirk his responsibilities or take those privileges for granted and was sympathetic to the desire of so many to be accepted into this country. Rob liked to tease and to be teased, told amazing, colorful stories, and enjoyed the ribald company of family, as well as numerous friends and colleagues. To know Rob was to love him, and he was truly loved, mostly for his kindness but also for his easy going, affable spirit. In addition to his wife of 61 years, Jeanne, Rob is survived by his children, John Wilder (and wife Kathleen Thompson, Gilbert AZ), Robert Adam (and partner Monica Williams, Hershey PA) and Mary Jane (and husband Mark Kapolka, Lebanon PA), and as well as his deeply loved grandchildren Pamela Jeanne, Sophie Jane and Wilder Albert Kapolka and Kevin John McNamee. He is also survived by brothers James and Stephen, numerous McNamee nieces and nephews, and preceded in death by siblings, Bernard, Thomas, and Mary Anne (“Susie”), all of Canada. A gift, in memoriam, may be made to The Chesapeake Bay Foundation, online at www.cbf.org or by phone at 410-268-8816.

Robert &#8220;Rob&#8221; John McNamee, 85, of Lebanon PA, passed away on August 30, 2021 due to complications from a bad fall at home. Up until his last days, Rob maintained his signature smile and the twinkle in his eye. Rob was born on May... View Obituary & Service Information

The family of Robert John "Rob" McNamee created this Life Tributes page to make it easy to share your memories.

Send flowers to the McNamee family.