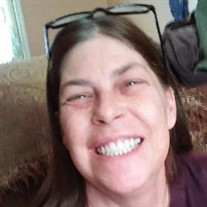 Sharen A. Gochnauer-Rankin, 57 of Conestoga passed away at UPMC, Lititz Friday evening, August 27, 2021. Born in Lancaster on April 7, 1964, she was the daughter of the late Glenn Gochnauer. Sharen was the wife of William Thomas "Tom" Rankin, with who she married on November 2, 1996. Sharen was quite an animal lover, she will be missed by her cat, Teddy. She would rescue any animal, whether injured or stranded by their mother and made sure they would be safe, from groundhogs to cats. She loved her Beardog and Buster, her labs and Susquehanna Hank, her cat which crossed the rainbow bridge. She was a Pittsburgh Steelers Fan, along with her love for Dale Earnhardt and Dale, Junior. Lately she enjoyed watching Chase Elliott race. Sharen was always willing to help and loved to talk to most anyone. She loved frogs and believed in the initials and the meaning "Fully Rely on God". Sharen enjoyed gardening, especially flowers, hummingbirds and interior decorating. "Ohana" which means family, was used quite often by Sharen in any texts to friends and family. Sharen will be deeply missed by her husband, Tom; daughter, Letisha M., wife of David Castellanos of Lancaster; sons, Brian K., husband of Angie Rankin of Mt. Wolf and Christopher M., husband of Celina Rankin of Crestview, Florida, along with her grandchildren, BreAnne, Nicholas, Brynn, Brayden and Adalynn. Sharen is also survived by her twin sister, Karen A. Gochnauer of Elmore, VT and her brother, Barry L., husband of Sandy Gochnauer of Lancaster. She was preceded in death by her brother, Glenn R. Gochnauer. Family and friends are respectfully invited to attend Sharen's funeral service on Wednesday, September 1, 2021 at 2PM from the Willow Street Mennonite Church, 399 E. Penn Grant Road, Willow Street. Friends will be received at the church from 1 to 2PM on Wednesday. Interment will be held in the adjoining church's cemetery. Please omit flowers, memorial remembrances may be made to one's favorite animal rescue or organization.

Sharen A. Gochnauer-Rankin, 57 of Conestoga passed away at UPMC, Lititz Friday evening, August 27, 2021. Born in Lancaster on April 7, 1964, she was the daughter of the late Glenn Gochnauer. Sharen was the wife of William Thomas "Tom" Rankin,... View Obituary & Service Information

The family of Sharen A. Gochnauer Rankin created this Life Tributes page to make it easy to share your memories.

Sharen A. Gochnauer-Rankin, 57 of Conestoga passed away at UPMC,...