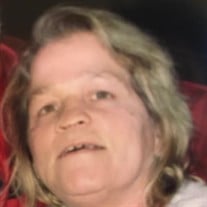 Sharon L. Vickers, 59 of Pequea, formerly of Mountville passed away unexpectedly Monday afternoon, February 7, 2022 at home. Born in Columbia on September 22, 1962, she was the daughter of the late Robert McKain and Dollie Jean Delucia McKain. She was the wife of Robert L. Vickers, with whom she married on January 6, 1988. Sharon worked for 9 years at Wonder Years in Mountville as their cook and childcare attendant. Previously she worked for Children's Palace at Park City. Most recently she worked at St. Anne's Retirement Community. Sharon was a fun loving lady who enjoyed going to the beach, especially Wildwood and spending time with her grandchildren. She enjoyed animals, especially her dogs Sharon will be missed by her husband Bob; her mother, Dollie McKain of Columbia; son, Zachary R. Vickers, fiancee of Nicole Dommel and daughter, Erica J. Vickers, all from Marietta; step son, Marc R. Vickers of Pequea and step daughter, Amy L., wife of Kevin Ile of Lancaster and 6 grandchildren. She is also survived by her sister, Debra, wife of Dale Zimmerman of Manheim and brothers, Robert McKain of Elizabethtown, Steve McKain of Lancaster and James McKain of Columbia. She was preceded in death by her twin brother, Edward McKain and her sister, Barbara McKain. Family and friends are respectfully invited to attend Sharon's funeral service on Tuesday, February 15, 2022 at 2PM from the Melanie B. Scheid Funeral Directors & Cremation Services, 3225 Main Street, Conestoga. Friends will be received at the funeral home on Tuesday from 1 to 2PM. Interment will be held in the Conestoga Memorial Park, Lancaster. Please omit flowers, memorial remembrances may be made in Sharon's memory to the Humane League of Lancaster County.

Sharon L. Vickers, 59 of Pequea, formerly of Mountville passed away unexpectedly Monday afternoon, February 7, 2022 at home. Born in Columbia on September 22, 1962, she was the daughter of the late Robert McKain and Dollie Jean Delucia McKain.... View Obituary & Service Information

The family of Sharon L. Vickers created this Life Tributes page to make it easy to share your memories.

Send flowers to the Vickers family.