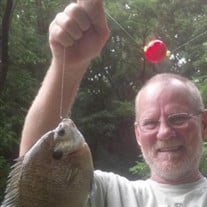 Stephen A. Rebman, 64 of Conestoga passed away Monday evening, May 24, 2021. Born in Lancaster on August 26, 1956, he was the son of the late Donald R. "Jake" and Nancy Rapp Rebman. He was the husband of Peggy Ann Dagen Rebman, with who he married on August 26, 1973. Steve was employed at the time of death with LSC Communications, formerly R.R. Donnelly where he was a pressman for over 30 years. He had worked in the construction field earlier in his life. He graduated from Lampeter-Strasburg High School in 1974. Steve enjoyed riding motorcycle, playing horseshoes, camping and fishing. He loved spending time with his family and taking care of his property and his pond. Steve always had a smile on his face, very humble and giving, while at the same time being an instigator. Steve will be deeply missed by his wife, Peggy; sons, Stephen A., Jr., husband of Kristin Rebman of Lancaster and Jeremiah N., husband of Kayla Rebman of Willow Street and his daughters, Beverly A. Rebman, companion of Joseph Eckenrode of Millersville and Dusty Rebman of Willow Street. Known as Pappy, he will be missed by his grandchildren, Quinton, Cody, Brandyn, Spencer, Stephen III, Harlie, Vanessa, Madison, Kennedi, Trinity and Abigail, along with 13 Great Grandchildren. He is also survived by his brothers, Terry, husband of Tracey Rebman of Lancaster and Colin Rebman of Conestoga and his sister, Tracy Stubbs of Lancaster. He was preceded in death by his brother, Donald R. "Checkers" Rebman, Jr. and infant twin grandchildren. Family and friends are respectfully invited to attend Steve's funeral service on Saturday, May 29, 2021 at 6PM from the Melanie B. Scheid Funeral Directors & Cremation Services, 3225 Main Street, Conestoga, PA. Friends will be received at the funeral home on Saturday from 4 to 6PM. Interment will be held in the Colemanville United Methodist Cemetery. Please omit flowers, memorial remembrances may be made in Steve's memory to American Lung Association.

Stephen A. Rebman, 64 of Conestoga passed away Monday evening, May 24, 2021. Born in Lancaster on August 26, 1956, he was the son of the late Donald R. "Jake" and Nancy Rapp Rebman. He was the husband of Peggy Ann Dagen Rebman, with who he... View Obituary & Service Information

The family of Stephen A. Rebman created this Life Tributes page to make it easy to share your memories.

Stephen A. Rebman, 64 of Conestoga passed away Monday evening,...

Send flowers to the Rebman family.