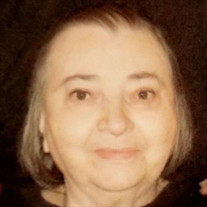 Theresa M. Arters, 94, formerly of Millersville passed away Friday morning, May 6, 2022 at Lebanon VA Medical Center where she was under hospice care. Born in Phoenixville on April 7, 1928, she was the daughter of the late William and Regina Yaworski Bickel. Theresa graduated from Phoenixville High School and attended Einstein Medical Center for Nursing. She worked as a nurses aide for several years privately and for Village Vista. Theresa was proud of being a United States Navy Veteran. She served from 1951 to 1956 and also in the Navy Reserves for many years. She enjoyed the ability to travel while in the service to such places as Hawaii, Japan and the Philippines. Theresa was a devout catholic and was a member of St. Philip the Apostle Catholic Church. She enjoyed being part of the Guys and Dolls at church. She was a life member of Millersville VFW Post #7294. Theresa was a loving and caring lady who would give her shirt off her back for anyone. She had a witty personality. Theresa will be missed by her daughter, Dawn M., wife of Keith Upton of Lancaster; sons, Vincent W., husband of Barbara Arters of Lancaster and Shawn D., husband of Christina Arters of Conestoga and grandchildren, Justin, Melissa, Anthony, Ann Marie, Alex, Allison and Gabrielle. She was preceded in death by her son, George A. Arters; brothers, Joseph, Francis, Robert, William and Vincent Bickel and her sisters, Marie Boeshore and Eleanor Landis. Family and friends are respectfully invited to attend Theresa's Mass of Christian Burial on Thursday, May 12, 2022 at 11AM from Sacred Heart Catholic Church, 2596 Cornwall Road, Cornwall, PA. Friends will be received at church from 10:30AM to 11AM on Thursday. Interment will be held in the Indiantown Gap National Cemetery, Annville where military honors will be accorded.

Theresa M. Arters, 94, formerly of Millersville passed away Friday morning, May 6, 2022 at Lebanon VA Medical Center where she was under hospice care. Born in Phoenixville on April 7, 1928, she was the daughter of the late William and Regina... View Obituary & Service Information

The family of Theresa M. Arters created this Life Tributes page to make it easy to share your memories.

Send flowers to the Arters family.