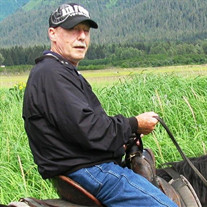 Thomas Cauler, Sr., 81 of Pequea passed away Monday evening, August 12, 2019 at the Lebanon VA Medical Center. Born on March 25, 1938 in Martic Township, he was the son of the late William L., Jr. and Anna E. Steckler Cauler. Tom was the husband of Rita L. Santacruz with who he married on April 23, 1960. Tom graduated from Penn Manor High School, Class of 1956. Tom served his country for over 20 years serving in the United States Air Force, retiring October 31, 1977 as MSGT. He served with the 469th Tactical Fighter Squadron. His specialty was mechanic and maintenance on the F105 Fighter Jets, he retired as Aircraft Maintenance Superintendent. Tom, Rita and family were last stationed in Alaska where they called home for several years before moving back to the Cauler homestead in Martic Township. Tom worked for Goodhart & Sons as a welder after moving back to Lancaster County. Tom loved to fish, hunt and trap. Tom found peace and enjoyment in horseback riding. He enjoyed playing softball. He was a member of Millersville VFW Post 7294 and St. Philips The Apostle Catholic Church. Tom was a true family man and will be dearly missed by his wife, Rita of 59 years; sons, Thomas, Jr., husband of Amy of Lady Smoke, VA, Ralph E., husband of Lori of Lancaster, John W., husband of Billie Jo of Pequea, Kenneth J. of Walnut Cove, NC, Brian P., husband of Darlene of Millersville and Gabriel S., fiancee of Linda Shirley of Lancaster and his daughter, Tonia-Ann wife of Chad Thompson of Lancaster. He will be missed by his 10 grandchildren and 14 great granchildren. Tom is survived by his brothers, William L, III and Patrick Cauler and his sisters, Anna Sellers, Mary Sage, Jane Wissler, Ruth Neff, Emma Bussell, Louise Stevens and Carolyn Best. He was preceded in death by his brothers, James and Edward Cauler and his sister Barbara Arnold. Family and friends are respectfully invited to attend Tom's Christian Prayer Service on Saturday, August 17, 2019 at 11AM from the Melanie B. Scheid Funeral Directors & Cremation Services, 3225 Main Street, Conestoga. Friends will be received on Saturday from 9:30 to 11AM. Overflow parking with be at the Conestoga Fire Company. Tom will be honored by the Dover Air Force Base who will provide military honors at the funeral home. Please omit flowers, memorial remembrances may be made in Tom's memory to the Lebanon VA Hospice, 1700 S. Lincoln Ave., Lebanon, PA 17042. For other information please call 717-872-1779 or to submit an online condolence visit www.melaniebscheidfh.com.

Thomas Cauler, Sr., 81 of Pequea passed away Monday evening, August 12, 2019 at the Lebanon VA Medical Center. Born on March 25, 1938 in Martic Township, he was the son of the late William L., Jr. and Anna E. Steckler Cauler. Tom was the husband... View Obituary & Service Information

The family of Thomas Cauler Sr.. created this Life Tributes page to make it easy to share your memories.

Send flowers to the Cauler family.