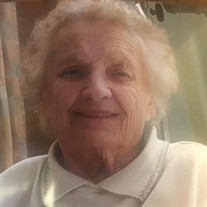 Verna M. Hess, 88 of Pequea Township passed away Monday morning, November 30, 2020 at Hamilton Arms. Born in Marticville on May 23, 1932, she was the daughter of the late Oliver and Mary Sickman Manning. She was the beloved wife of Warren Hess, who preceded her in death. Verna graduated from Penn Manor High School and soon thereafter, married Warren. She spent most of her hours on this earth taking care of her husband Warren, and their three kids. She was the TV repair person, live remote control device, light holder, dinner provider, and trip navigator for Warren. Early in their relationship she realized that she had to learn to love Duke Blue Devils basketball, Notre Dame football, the Millersville VFW fastpitch softball team, and the beloved NY Yankees, or be stuck at home while he followed the teams either in-person, or in front of the TV. She became one heck of a fan and they traveled the country together from baseball park to softball park to the stadiums of Notre Dame football and Yankee baseball. She loved going to public auctions, where she could strike up a conversation with anyone in a short time. She enjoyed reading until her eyesight failed and instead, took advantage of books on tape she received from the Lancaster Blind Association. Once the kids were all safely in school and old enough to fend for themselves, she began working at Keppel’s Candy Company in Lancaster, where she became a supervisor. She was a very intelligent and fair person, who loved talking to friends and family either in person or over the phone. She enjoyed watching her son, and grandsons play sports and was furious when they were not in the game. She loved flowers and gardening. Warren always had a large vegetable garden and she spent hours harvesting and freezing the vegetables that resulted. Verna will be missed by her son, Mickey Hess, fiancée of Cindy Heslin of Travelers Rest, SC; her daughters, Sandy Heller of Lancaster and Sherry Hess, spouse of Helen Hiller of Norristown; grandchildren, Rob and Kyle Heller, Joel Hess and Nicholas D'Alfonso. She is also survived by her great grandchildren, Landon, Jacob, Adam, and Lucas Heller and her brother, Robert Manning, husband of Peggy of Landisville. She was preceded in death by her grandson, Andrew Hess, her brothers, Howard Manning, Harry Manning and Martin Manning and her sisters, Pauline Charles, Helen Denlinger and Ethel Campbell. Private interment will be held at the convenience of Verna's family in Conestoga Memorial Park. In lieu of flowers, memorial donations may be made to VisionCorps, 244 N. Queen Street, Lancaster, PA 17603 (or via their website @ VisionCorps.net)

Verna M. Hess, 88 of Pequea Township passed away Monday morning, November 30, 2020 at Hamilton Arms. Born in Marticville on May 23, 1932, she was the daughter of the late Oliver and Mary Sickman Manning. She was the beloved wife of Warren... View Obituary & Service Information

The family of Verna M. Hess created this Life Tributes page to make it easy to share your memories.

Send flowers to the Hess family.