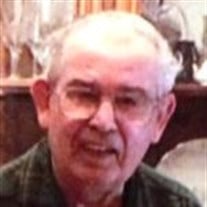 Vernon E. Herr, Jr., 95, formerly of Gordonville and South Christian Street, Lancaster, died Saturday evening, August 31, 2019 at Conestoga View. Born April 17, 1924, in Lancaster, he was the son of the late Vernon Ellis Herr and Mary ELizabeth Moss Herr. He was the husband of Erla T. Fritsch Herr with who he married on November 15, 1947. Vernon graduated from J.P. McCaskey High School in 1942. He was a WWII Army Veteran who served from 1942-1946. He enjoyed watching the Lawrence Welk Show and enjoyed listening to Big Band Era Music. Earlier in his life, he attended First United Methodist Church in Lancaster. He retired from the former General Cigar & Tobacco, Lancaster, after 26 years of service in maintenance. He later worked as a bagger at the former Willow Valley Market, delivery driver for the former Big "A' Auto Parts, Lancaster and drove for the Amish Community. Vernon will be missed by his wife, Erla, a daughter, Linda D., married to Damon Arnold, of Lancaster and a brother, Thomas M., husband of Dorothy Herr of Lancaster along with several nieces and nephews. Family and friends are respectfully invited to attend Vernon's Graveside Service from the Mellinger's Mennonite Cemetery, 11 Greenfield Road, Lancaster, PA 17602 on Thursday afternoon, September 5, 2019 at 2:00 p.m. where military honors will be performed. Please omit flowers. Memorial Remembrances can be made to SPCA, Humane League of Lancaster County or a charity of one's choice. For other information, please call 717-393-1776 or to submit an online condolence visit www.melaniebscheidfh.com.

The family of Vernon E. Herr Jr. created this Life Tributes page to make it easy to share your memories.

Send flowers to the Herr family.