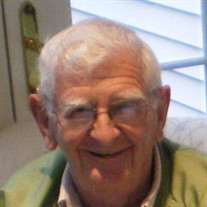 W. Melvin Hess, 90 of Washington Boro, formerly of Conestoga passed away Tuesday afternoon, September 14, 2021 at Lancaster Rehabilitation Hospital from complications from a stroke. Born in Conestoga Township on March 30, 1931, he was the son of the late Amos and Mary M. Eshleman Hess. He was the husband of Hazel G. Frey Hess who preceded him in death on April 22, 2009 and Arlene Gehman Hess who preceded him in death on February 4, 2020. Melvin worked as a HVAC mechanic for H.M. Stauffer & Sons for many years and retired in the 1990's from the Sico Company. After retirement he continued to service oil furnaces for many local customers and worked for John Herr's Market, Millersville. Melvin was a charter member of the former Calvary Baptist Church, Millersville, now known as Grace Baptist Church. He attended Grace Community Church, Willow Street. He enjoyed reading and tinkering around with wood and mechanicals. He had a great sense of humor and loved to crack jokes. Melvin will be missed by his son, Melvin E., husband of Wendy S. Mays Hess of Conestoga and his daughters, Linda M. Hess of Conestoga, Patricia A. Young of Millersville and Mary H. Jacoby of Conestoga. He is also survived by 13 grandchildren, 17 great grandchildren and 3 great great grandchildren. He was preceded in death by his grandson, Timothy Hess; brothers, Walter and David Hess and his sisters, Ruth Hess, Suey Hammer, Catherine Good, Grace Groff, Helen Craul and Ida Hostetter. Family and friends are respectfully invited to attend Melvin's funeral service on Saturday, September 18, 2021 at 2PM from the Melanie B. Scheid Funeral Directors & Cremation Services, 3225 Main Street, Conestoga, with Pastor Paul Weitzel officiating. Friends will be received at the funeral home on Saturday from 1 to 2PM. Interment will be held in the Creswell Cemetery.

W. Melvin Hess, 90 of Washington Boro, formerly of Conestoga passed away Tuesday afternoon, September 14, 2021 at Lancaster Rehabilitation Hospital from complications from a stroke. Born in Conestoga Township on March 30, 1931, he was the... View Obituary & Service Information

The family of W. Melvin Hess created this Life Tributes page to make it easy to share your memories.

Send flowers to the Hess family.