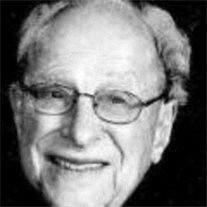 William M. Miller, 87, of Cornwall, formerly of Millersville passed away May 8, 2011 at Cornwall Manor. He was born February 13, 1924 in Hummelstown, the son of the late Harry K. and Dorothy Suggett Miller. He was married in 1949 to Dorothy DeBoer Miller. Bill attended Hummelstown High School, graduating in 1941 and in 1942 enlisted in the Army Air Corps, training as a gunner. He served in Okinawa along with his twin brother, flying a B52 named Panchito. After WWII he attended Bloomsburg State College in flight training. He flew with Eastern Airlines as a purser. He then attended Hershey Junior College and Lehigh University, graduating in 1950 and continuing in graduate school at Springfield College in Massachusetts. Bill was employed in the Boys Work at the YMCA in Lancaster and later as an insurance adjuster with Farm Bureau, Nationwide Insurance and Erie Insurance. He started his own business in sales as Bill Miller's-ville Insurance Agency in Millersville in which he retired in 1983. He was elected Mayor Millersville in 1968. In retirement, he worked in marketing at Cornwall Manor and later with the Lancaster County Office of Aging. Bill was a former member of Grace United Methodist Church, Millersville and a member of Church of the Good Shephard, Lebanon where he served on boards and other several committees. He was a member of the Millersville Lions Club. In addition to his wife, he is survived by four children, Peter, husband of Mary, of Seattle, WA; Rev. Nancy Miller of Cape May Courthouse, NJ; Betsy, wife of Rev. Dr. Dennis Keller of Mechanicsburg; and Carolyn, wife of Craig Patterson, of Lancaster. Also surviving 2 brothers, Harry of Prescott, AZ and Bert of Asheville, NC and five grandchildren, Jennifer, Rachel, Nicholas, Erin, and Alex. Relatives and Friends are respectfully invited to attend Bill's Memorial Service from the Zerr Chapel at Cornwall Manor on Saturday, June 18, 2011 at 10:30 AM. In lieu of flowers, memorial remembrances may be made in Bill's memory to the Disabled American Veterans, PO Box 14301, Cincinnati, OH 45250 or to the United Methodist Mission Intern, Rachel Keller, Advance #13105Z, c/o Church of the Good Shephard, 1500 Quentin Road, Lebanon, PA 17042.

William M. Miller, 87, of Cornwall, formerly of Millersville passed away May 8, 2011 at Cornwall Manor. He was born February 13, 1924 in Hummelstown, the son of the late Harry K. and Dorothy Suggett Miller. He was married in 1949 to Dorothy... View Obituary & Service Information

The family of William M. Miller created this Life Tributes page to make it easy to share your memories.

Send flowers to the Miller family.